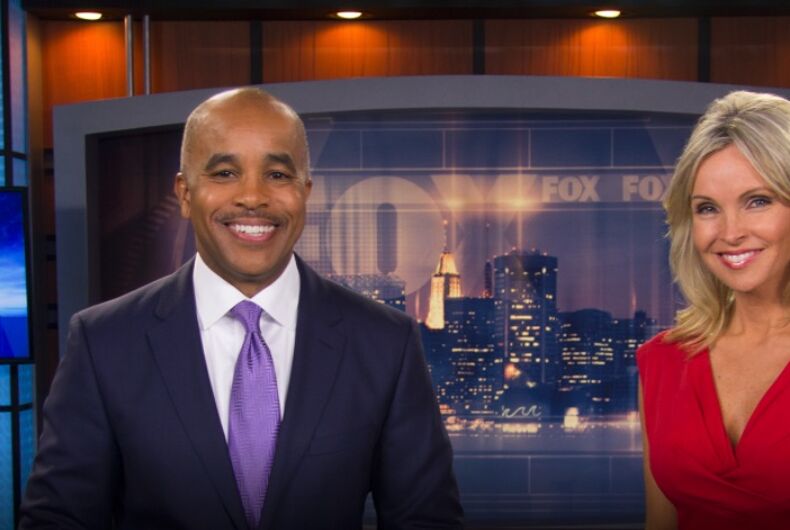 Everyone knows about Fox News and its distorted lens on reality. But a lesser known syndicate presents a far more significant threat to objective journalism because it threatens to shape local news coverage across the nation.

Sinclair Broadcasting is in the process of acquiring 42 television stations in major media markets, including New York and Chicago, to add to its network of 143 stations. The move would mean that Sinclair, already the nation’s largest broadcast, would have stations available to nearly three-quarters of Americans.

Sinclair has been the subject of attention for forcing its local anchors to read verbatim a statement that slammed fellow journalists for “false news.” Deadspin compiled the statements from all 190 stations into a bone-chilling video.

The reach of Sinclair is especially troubling because the company makes no bones about promoting right-wing talking points. More to the point, it forces local stations to air stories that clearly favor its conservative viewpoint and false narratives.

David Smith, the executive chairman of Sinclair, dismisses most journalism as biased. “The print media is so left wing as to be meaningless dribble which accounts for why the industry is and will fade away,” he told New York Magazine.

But when it comes to dribble, no one can top Sinclair (although Fox is neck and neck). The company orders local stations to air “must run” segments that bear little resemblance to objective journalism. In the past, “must run” segments have falsely claimed that Obamacare was increasing mortality and that DACA was unconstitutional.

Moreover, Sinclair went out of its way to boost Donald Trump’s presidential campaign, running a slew of anti-Hillary “exposes.” At the same time, Sinclair cut a deal with Trump’s campaign for access that resulted in a slew of favorable coverage.

Sinclair’s bias is not new. In 2004, it pre-empted regular programming for a “documentary” smearing Democratic presidential nominee John Kerry.

Needless to say, Sinclair’s bias extends to LGBT issues. In 2012, Sinclair had a Baltimore anchor (now a national correspondent) voice robocalls asking recipients biased questions about LGBT issues, before fielding a series of negative questions about then-Gov. Martin O’Malley. The company behind those calls had done robocalls in Oregon that said marriage equality “circumvents the expressed will of Oregonians.”

Of course, Sinclair Broadcasting is President Trump’s idea of journalistic excellence. In a tweet, Trump declared Sinclair was “far superior to CNN.”

The statement that Sinclair forced its anchors across the country to read included this line:  “Some members of the media use their platforms to push their own personal bias. This is extremely dangerous to our democracy.”

Truer words were never spoken on Sinclair. Just not for the reasons the company would like you to believe.

Tony Perkins nailed himself to a Google cross for Easter

This trans woman was shot & killed in her car. People drove around her for hours without stopping.