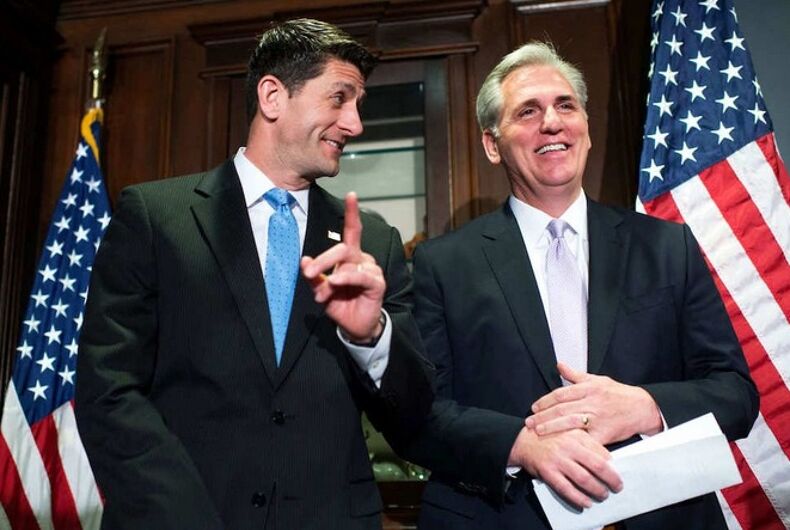 Paul Ryan’s long-awaited announcement that he would not run for re-election set off a scramble to see who would replace him as leader of the House Republicans. Rep. Steve Scalise and Rep. Kevin McCarthy were duking it out for the spot, but Scalise has withdrawn, so now the spot is McCarthy’s to lose (which he did once before).

When dealing with House Republicans these days, it’s usually a case of degrees of awfulness. For all intents and purposes, McCarthy is just as awful as Scalise. He has a 100% voting record from the Family Research Council and has been a reliable opponent of marriage equality.

Perhaps McCarthy’s lowest moment came when he stopped legislation to uphold President Obama’s executive order banning job discrimination.  The measure had the votes to pass, but McCarthy, as the Republican whip, pressured seven Republicans to change their vote, thus dooming the amendment.

Rep. Sean Maloney (D.-NY), the amendment’s sponsor, complained that Republicans held the vote open for a long time so that they could change the outcome while the vote was underway.

“They literally snatched discrimination from the jaws of equality,” Maloney said. Maloney actually approached McCarthy as he was pressuring his colleagues, and McCarthy told him to get back to his side of the aisle.

“I told him, ‘What side am I supposed to stand on in support of equality?’” said Maloney, New York‘s first openly gay congressman. “It was disgraceful.” Democrats shouted “Shame” as the vote tally was completed, but clearly McCarthy is a man without any shame.

Ryan has insisted that he’ll hang on until the end of this Congress, but pressure is already building for him to step aside sooner. That would give McCarthy the opportunity to become Speaker of the House before the election.

It’s looking mighty iffy that he’ll have that job after the election, though. Republicans are in full panic that they are going to be overwhelmed at the polls in November. Some GOP leaders have already written off the House as a lost cause and are focusing on holding onto the Senate.

McCarthy’s path to the Speakership isn’t going to be without bumps. The leader of the far-right Freedom Caucus, Rep. Jim Jordan, is floating the possibility that he will challenge McCarthy.

McCarthy ran afoul of the Freedom Caucus in his last bid to become Speaker on the grounds that he was insufficiently conservative. Although the group is small, it has enough votes to deny McCarthy the votes he needs. If that does happen, expect Scalise to step in as a more palatable candidate.

Andy Cohen tells Ellen why he gets kicked off dating apps