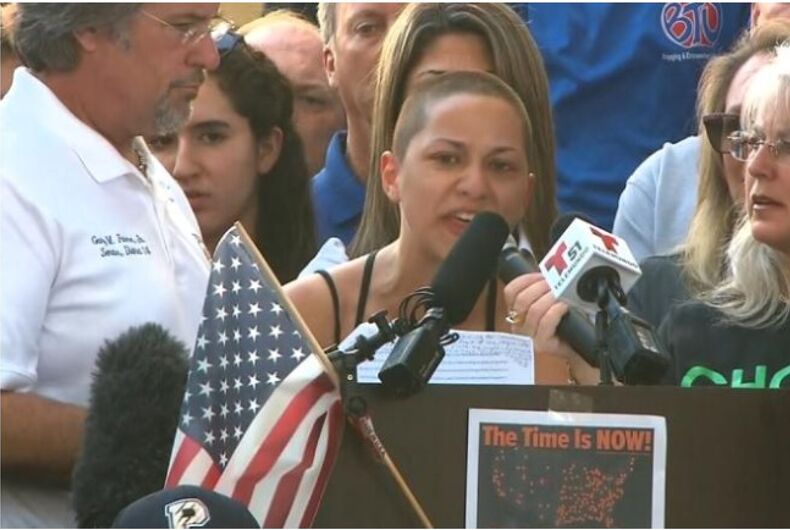 Emma Gonzalez delivers a speech after the school shooting in Parkland, FloridaPhoto: Screenshot

Leslie Gibson, a Republican candidate for the Maine House of Representatives has used Twitter to attack two survivors of the Parkland, Florida school shooting. He is running unopposed and Democrats are now looking to change that, calling for a challenger to file before the deadline.

Gibson, a lifetime member of the National Rifle Association (NRA), called Emma Gonzalez, who identifies as bisexual, a “skinhead lesbian,” and called another vocal survivor, David Hogg, a “baldfaced liar.”

“There is nothing about this skinhead lesbian that impresses me and there is nothing that she has to say unless you’re frothing at the mouth moonbat,” Gibson wrote in response to an article by The Hill noting Gonzalez now has more Twitter followers than the NRA. He even questioned the validity of calling her a survivor, stating she “was in a completely different part of the school” from where shots were fired.

His comments about Hogg were in response to the student saying members of Congress were owned by the NRA.

The candidate has since made both his personal and campaign Twitter accounts private.

Gibson has apologized for his remarks.

Related: Students are walking out of school across the country to protest gun violence

“Emma Gonzalez is a courageous young woman who is stepping up and speaking out. Mr. Gibson’s attack on her sexual orientation was reprehensible,” Matt Moonen, executive director of LGBTQ advocacy group Equality Maine, told NBC News. “This kind of rhetoric has no place in any elected office, and certainly not in the Maine House of Representatives.”

“I wish I knew someone who could get into this race,” Pat Fogg, a Democratic organizer, told the Sun Journal. “That sort of stupidity really turns people off.”

Others are taking to Twitter to echo Fogg’s sentiment that someone should run against the currently unopposed Gibson.

For anyone interested in running as a Democrat for the Maine House of Representatives in District 57 (towns of Greene & Sabattus), here is the candidate’s guide. You have to have lived in that district for the last 3 months and in Maine for the past year. https://t.co/ZYvs4z4Jle

Secretly considering a run for State House Rep. in #Maine’s 57th district? Let #LeslieGibson’s tweets be your tipping point- because he’s the only declared candidate. (D/R party candidates must have their signatures submitted by Thursday). #mepolitics https://t.co/Xuw2g4SLfQ

The filing deadline for party candidates is March 15, and Independents can file as late as June 1.

UPDATE: A challenger has stepped forward. Democrat Eryn Gilchrist filed to run just before the deadline for party candidates.

“I never thought I would run for office, and I was perfectly content with just remaining a member of the community, but after reading Mr. Gibson’s comments I thought that the people of Greene and Sabattus deserved a representative who will respect people and try to work through their differences to make our lives better,” she said in a statement. “That’s what I pledge to do if I am lucky enough to be elected, and I look forward to working hard over the next several months to earn the trust and support of people throughout my community.”

UPDATE 2: Gibson has dropped out of the race.

“It’s the best thing for everybody,” he told the Sun Journal on Friday, after discussing it with friends and family.

He added that he hoped to bring back “some peace and quiet in our lives.”

Richard Simmons sued a tabloid for calling him trans. Now he has to pay their legal fees.

The trans folk who protested Pride have been sentenced, but was justice served?