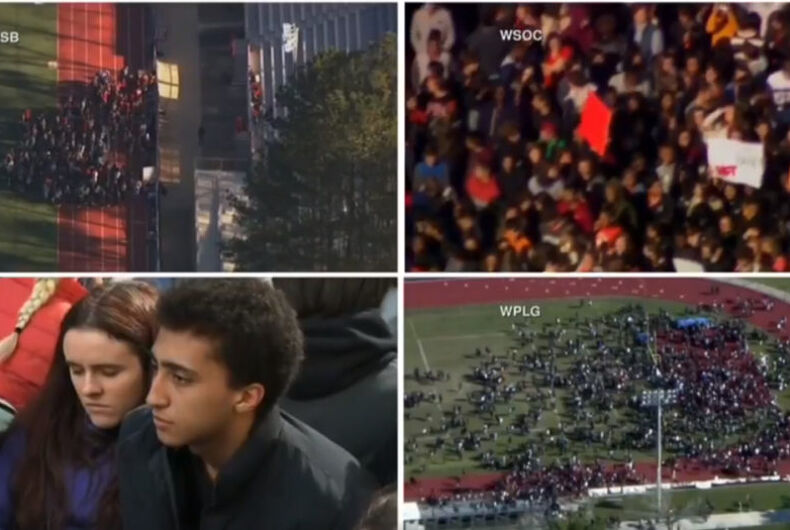 Students are walking out of class across the country to protest gun violencePhoto: Screenshot/CNN

Students are walking out of class across the country to protest gun violence and the government’s failure to pass meaningful gun control legislation.

The National Walkout Day was organized following the school shooting a month ago today in Parkland, Florida, claiming the lives of 17 and injuring many more. Students from Parkland have already shown themselves to be eloquent and fierce voices in the debate to end mass shootings, but this mass action now sends a clear message that they intend to do more than just deliver speeches.

The demonstrations are intended to put increased pressure on Congress, and the White House, to finally take real action on this country’s gun problem.

This protest will be followed up on March 24 with the March For Our Lives rally, taking place in Washington, D.C. and in cities nationwide.

Here is some live footage, and reactions, from the demonstrations, taking place throughout the day. Share your experiences in the comments below.

MS Douglas High survivor vows to vote against anyone who doesn't support an assault weapons ban.

"I lost one of my friends … I'm never going to be able to see her again. I'm just doing everything for her." #NationalWalkoutDay pic.twitter.com/5BRuT40vZi

#IWillMarch to demand the change from those who should be representing the people, not the gun manufacturers filling their pockets.

Our politicians work for us and they are failing us.

We march to tell them that we will triumph over greed and corruption.#MarchForOurLives

To the individuals who believe we’re fighting the wrong fight,

We promise we will keep you safe. #NeverAgain #MarchForOurLives

The first step to changing the world is believing that you can. #walkoutandwalkup

I'll b live at this link soon https://t.co/ZanbFVnhth

Good Luck, Stay Safe, and Kick B*tt to all those walking out of school today ! 💞💞 https://t.co/FGRdXTkrbD

#IWillMarch to push legislation that should’ve happened years ago, will you join us on March 24th??

The kids taking part in the #NationalSchoolWalkout make me so proud. Doesn’t matter how old you are, you can always stand up for what you think is right! IM WITH YOU GUYS ❤️🙋🏼‍♂️

On the one-month anniversary of the Parkland school shooting, students are walking out in protest of Congress’ failure to act on gun violence. Let’s support them, and the March to Washington DC in ten days👊🏻 #MarchForOurLives

#iwillmarch because I want the NRA to fear the vibrations of the people’s stomps across the nation.

Students protesting gun violence, in front of the White House. Listen to the silence. pic.twitter.com/2ViDlJb0HX

Activists lay thousands of shoes outside US Capitol for children killed by gun violence, @CBSNews rpts; @AMarch4OurLives is on March 24: https://t.co/1iKkKavT4u pic.twitter.com/PQQd5NA8KO

“This is what Democracy looks like!” Students and allies rally outside of the U.S. Capitol building in Washington, D.C. as part of #NationalWalkoutDay to protest for stricter gun laws. https://t.co/JuOWURifIL pic.twitter.com/zpLrLwkagJ

Ellen & Sean Hayes have a ‘Battle of the Gays’