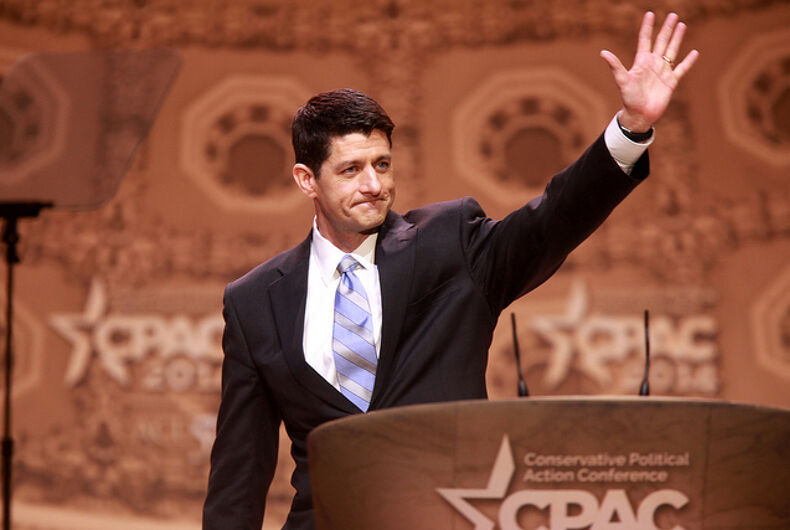 A Congressional Republican is saying that Speaker Paul Ryan (R-Wisconsin) may be stepping down soon.

Speaking to Nevada Newsmakers, Rep. Mark Amodei (R-NV) said, “The rumor mill is that Paul Ryan is getting ready to resign in the next 30 to 60 days and that Steve Scalise will be the new Speaker.”

Rep. Steve Scalise (R-Louisiana) is the current Majority Whip, making him the third-highest ranked Republican in the House of Representatives.

Last year, a lesbian cop was shot while saving Scalise during a mass shooting. Instead of making him rethink his opposition to gun regulations and LGBT rights, he said that his opposition to gun control was “fortified” and, several weeks later, spoke at a conference held by an anti-LGBT hate group.

“Now that is interesting, because no one has talked to members on how they are going to vote,” Amodei said. “Now, maybe they have talked to all of the members but me. I don’t know, so that is the rumor mill from last week.”

When asked why Ryan would want to leave, Amodei speculated that Ryan probably accomplished everything he wanted since Congress gave the wealthy a major tax cut last year.

“If I was just guessing, he wanted to do the tax bill. You know, [former Speaker] John Boehner said the same thing: ‘Hey, when I checked all of the boxes I thought were important and I’m moving on to whatever else.'”

Ryan’s office denied the rumors. “The speaker is not resigning,” a spokesperson said in a statement.

Aaron Carter goes back in the closet, says he was ‘misconstrued’ over coming out as bi