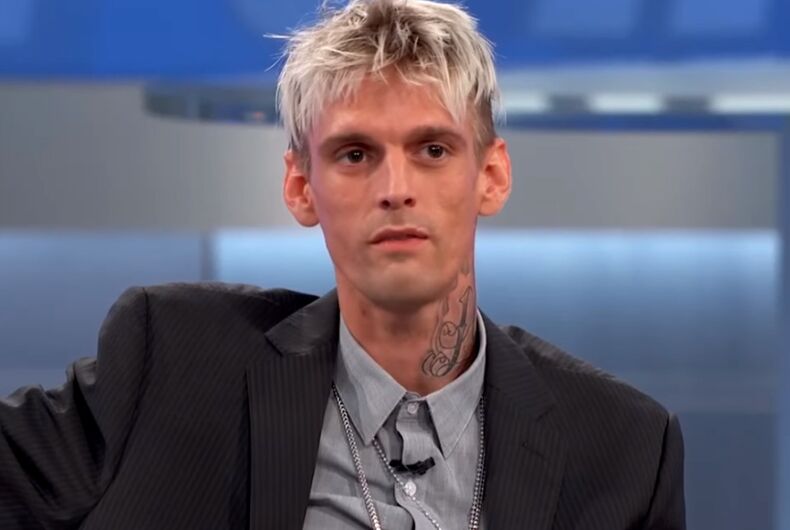 Aaron Carter has gone back into the closet, claiming he was “misconstrued” when he came out as bisexual last summer.

In a since deleted tweet, Carter said he wanted to share something he felt was “important for myself and my identity that has been weighing on my chest for nearly half of my life.”

“This doesn’t bring me shame, just a weight and burden I have held onto for a long time and would like lifted off of me,” he said. “I grew up in this entertainment industry at a very young age and when I was around 13-years-old I started to find boys and girls attractive. There were years that went by that I thought about it, but it wasn’t until I was 17-years-old, after a few relationships with girls, I had an experience with a male that I had an attraction to who I also worked with and grew up with.”

Now he claims that calling him bisexual based on these revelations is a misreading.

He was asked during a recent interview with Hollywood Life if he was open to a relationship with another man.

“Yeah, no,” he said. “It was more so just a story that happened when I was like 17 with somebody, and I can find men and women attractive, but when it comes down to it, I think it was a little misconstrued. I see myself being with a woman and having kids. I want to have a family.”

Because, you know, two men could never possibly have a child together.

“I keep telling people that,” he said of his desire to settle down with a woman someday. “I don’t want it to be misconstrued too much just because I was open about a story.”

This is quite the different story from the one he told while a guest on the TV show The Doctors, where he talked about coming out as bisexual, and said that he would be open to pursing a man, “comes into my life and sparks an interest.”

At the time of his coming out, he appeared to imply his ex-girlfriend, Madison Parker, left him due to his orientation.

“My split with Aaron has nothing to do with him being bisexual,” she said, noting she has many friends in the LGBTQ community. “Our parting of ways is something that has been coming for some time and it’s the best thing for us both.”

Carter also labeled himself as bisexual during a performance at the LGBTQ restaurant and bar Hamburger Mary’s.

“Yes, I am a bisexual man,” he told the crowd after his first song, the Tampa Bay Times reported.

In another now-deleted tweet he thanked the community, saying he was “so overwhelmed by your love and support.”

But now he wants off the queer train, apparently.

Well, fine, whatever, but don’t be surprised if that support you were feeling starts to waver as people begin to wonder if you just played at labeling yourself bisexual for the publicity. Or, if you truly are bisexual but decided the heat was too much and decided to abandon the community in order to go back into the closet.

It’s sad to see anyone remain closeted, and it’s sadder still to see someone go back in. If that’s what this is, let’s hope he finds the courage to once more be open about himself without feeling a need to obfuscate.

Is Paul Ryan about to resign?

Man tells school board the superintendent bullied him in high school. His bully laughed at him.