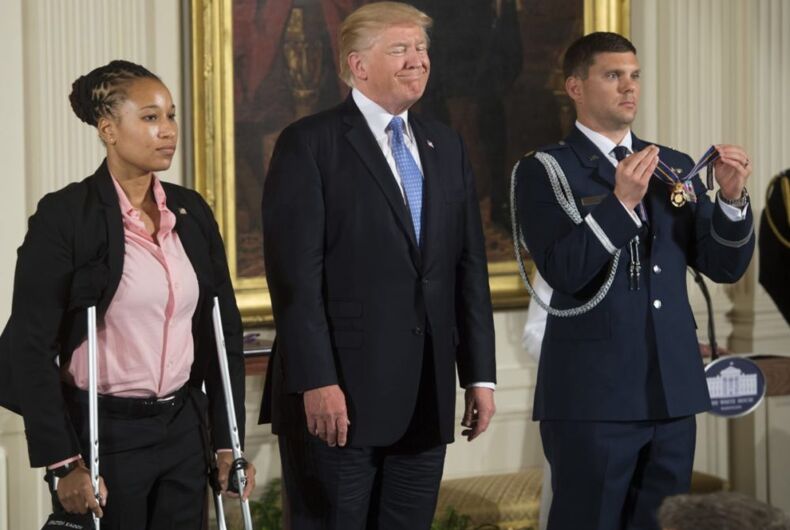 House Majority Whip Steve Scalise, a Louisiana Republican who was shot and almost killed during a mass shooting, was saved by Crystal Griner, a married lesbian police officer who was wounded protecting him. Griner shot and killed the assailant despite being shot herself.

Scalise, who recently returned to Congress after an extensive recuperation, was asked if being the target of a domestic terrorist had changed his mind on gun control. The Republican shocked the nation by saying, “I think it’s fortified it.”

“Because first of all you’ve got to recognize that when there’s a tragedy like this, the first thing we should be thinking about is praying for the people who were injured and doing whatever we can to help them, to help law enforcement. We shouldn’t first be thinking of promoting our political agenda,” Scalise told FOX News’ Martha MacCallum.

In an effort to completely twist himself into the most ungrateful and disgusting human being on Earth, the far right legislator also gave the finger to his rescuer. Instead of “doing whatever we can to help” the person who was shot saving his life, Scalise will repay the favor by speaking at a conference sponsored by an LGBT hate group.

Scalise will address the Values Voters Summit on October 13. The event is hosted by the Family Research Council.

“There were times when we wondered if House Majority Whip Steve Scalise (R-La.) would ever speak at VVS again,” the group’s leader, Tony Perkins, said in an emailed statement. “But next week, the miraculous recovery of my good friend will literally take center stage, as Steve makes a return trip to the biggest gathering of pro-family conservatives in the country after a shooting that rocked the country.”

If the group Scalise is addressing had their way, the woman who saved his life wouldn’t be married and she wouldn’t have any job protections to ensure she was there that fateful day to rescue him.

Griner, for her part, did what any professional would do. She did her job without discrimination, she didn’t judge his sexuality unworthy of professional conduct, and she put her neck out to do what is right.

Scalise could learn a lot from her. Instead he’ll be too busy attacking her life – as part of his “political agenda.”