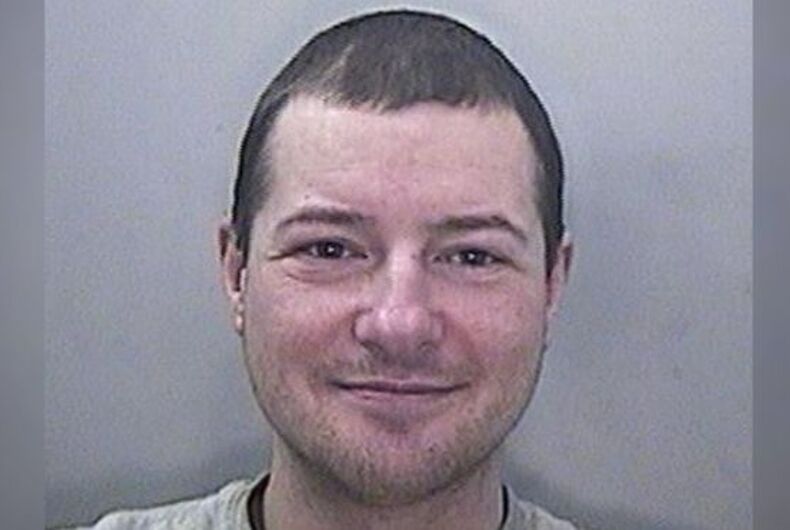 Jesus Christianity has admitted to communicating threats at people on their way to a pride eventPhoto: South Wales Police

A man named Jesus Christianity, who made a bomb threat against a pride event in Penarth, Wales has been sentenced to 17 months in prison.

Christianity, 34, was on a train to Cardiff when he began verbally assaulting people he could tell were going to Pride Cymru. A young woman on the train called the police, who were able to locate and tackle him at the parade.

“He began shouting quotes from the Bible towards young people who he could tell from their appearance were attending Cardiff’s pride event,” explained Prosecutor Gareth James. “He started saying it was Adam and Eve, not Adam and Adam, and said gays were disgusting.”

“When the passengers got off he said to one of them ‘I’m going to pride now and I’ve got a bomb in my backpack,'” James contined. “He directed these comments principally because of people’s sexual orientation.”

Christianity was bailed out, reports Penarth Times, only to be arrested weeks later for threatening to burn down his apartment complex after getting annoyed by construction workers working on a neighbor’s home.

Christianity’s attorney said his client never intended to blow up the event, noting that he did not have a bomb as he claimed, nor any other weapons. He did have a toy gun on his person. Further, he added that the 34-year-old was suffering from “clear psychiatric difficulties.”

He also added that his client said “he has no hostility towards people who are gay.”

Christianity pleaded guilty to communicating or falsely giving information with intent, and to making a threat to damage or destroy property.

Judge Neil Bidder QC said he accepted that Christianity wasn’t a terrorist, and regretted his actions, but did not buy the defense’s argument that he was not homophobic.

He said the man’s actions were clearly “motivated by hostility to homosexuality,” and that they were “upsetting to those whom were affected,” as well as a strain on police services.

A number of pride events around the world have gone on in face of violent threats, with an increased concern following the mass shooting at Pulse nightclub in Orlando in 2016. A man named James Wesley Howell was arrested that June, with a loaded assault rifle and chemical explosives in his car, mixed and ready for detonation, having said he was on his way to the LA Pride Parade. He has pleaded not guilty.

A pride event in College Station, Texas was cancelled that year following threats.