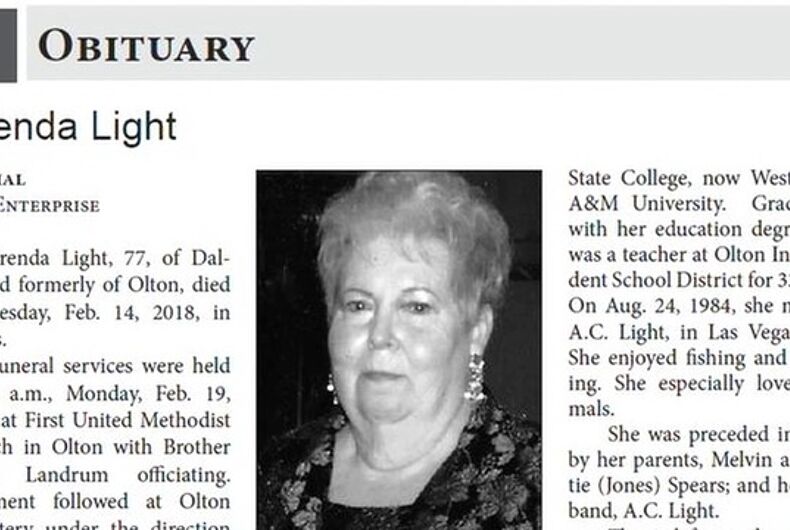 A newspaper in Texas removed a reference to a gay man in an obituary, citing the publisher’s “religious conviction.”

Barry Giles and John Gambill of Dallas, Texas, have been together for 31 years, and John was close to Barry’s mother Brenda Light, and the three often took trips together.

When Brenda passed away last month, the couple sent an obituary for her to the local paper, the Olton Enterprise. They included a sentence with both of their names: “Those left to cherish her memory include her son, Barry Giles and his husband, John Gambill of Dallas.”

But when they saw the obituary published in the paper, they found that John’s name was cut out: “Those left to cherish her memory include her son, Barry Giles of Dallas.”

“It wiped John completely off the picture like he didn’t exist,” Barry said.

John called the paper to find out why they cut him out.

“I said, ‘Why was my name left out?’ And he said, ‘Because I wanted to.’ And that’s all there was to the conversation.”

Phillip Hamilton, the publisher of the Olton Enterprise and a Baptist pastor, said in a statement, “It is my religious conviction that a male cannot have a husband. It is also my belief that to publish anything contrary to God’s Word on this issue would be to publish something in the newspaper that is not true.”

The paper has gotten negative feedback on Facebook, and Hamilton posted a statement there too. “It would be unethical to publish a news item that is known by the editor to be false. Based on the truth found in the Word of God, I could not in good conscience identify Mr. Gambill as the husband of Mr. Giles.”

He did not explain why he thought it was unethical to identify John as someone “left to cherish [Brenda’s] memory.”

John was left heart-broken. “She’s like my second mom, you know,” he said.