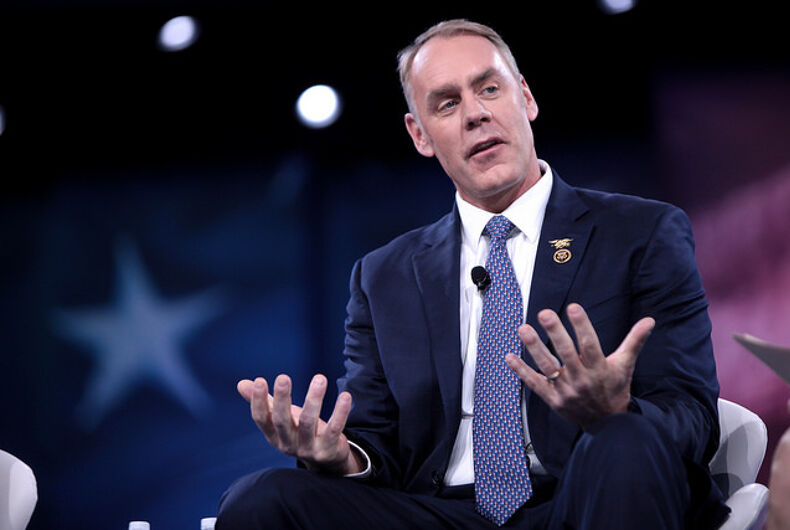 Employees at the Interior Department have said Interior Secretary Ryan Zinke told them diversity no longer matters and he won’t focus on it.

Each time, sources said he followed up those statements by stressing his focus was on finding the best qualified candidate.

One staffer recounted a hallway meet-and-greet shortly after Zinke was confirmed, where he was asked about diversity at the Interior Department, as 70 percent of the employees are white.

“(Zinke) flat out said, ‘I don’t really think that’s important anymore. We don’t need to focus on that anymore.’ He obviously needed someone to provide him with better talking points,” a staffer told CNN.

A second staffer said he heard Zinke say something similar in a separate hallway meet-and-greet, as well as again months later at a holiday party.

“He said it several times. I think it’s just how he speaks – he has his canned talking points,” the second source said.

A third source, reportedly a minority in a leadership position in the department, said he heard the secretary make a similar comment during a management meeting.

“That told me everything I needed to know,” the source said. “It’s a hard business as it is, and then not to be respected or appreciated for the diverse perspective that you bring to the situation — and that’s why it’s important in my opinion. It’s the fact that we don’t look at things the same way.”

Related: Interior Secretary wouldn’t fly pride flag over Stonewall. He flies his own flag instead.

The allegations come on the heels of the Interior last year unexpectedly reassigning 33 senior executive staffers, 15 of which were minorities, according to Katie Atkinson, a lawyer for one of the staffers who was moved. The reassignments have resulted in complaints with the US Merit Systems Board, as well as heightened attention to a longstanding issue of a lack of diversity in the department.

Zinke is also being investigated by multiple agencies, including Interior’s inspector general and Office of Special Counsel, regarding the employee reassignments, as well as taxpayer spending on possible politically related travel, CNN reports.

Interior Department spokeswoman Heather Swift said “the anonymous claims made against the secretary are untrue.”

“As a woman who has worked for him for a number of years in senior positions, I say without a doubt this claim is untrue, and I am hopeful that they are a result of a misunderstanding and not a deliberate mistruth,” she added.

Zinke has also shown he is no friend to the LGBTQ community, both during his time as a congressman in Montana, backing anti-LGBTQ discrimination in all federal agencies, but also during his stint in the Interior, where he made sure a pride flag wouldn’t fly on federal lands.