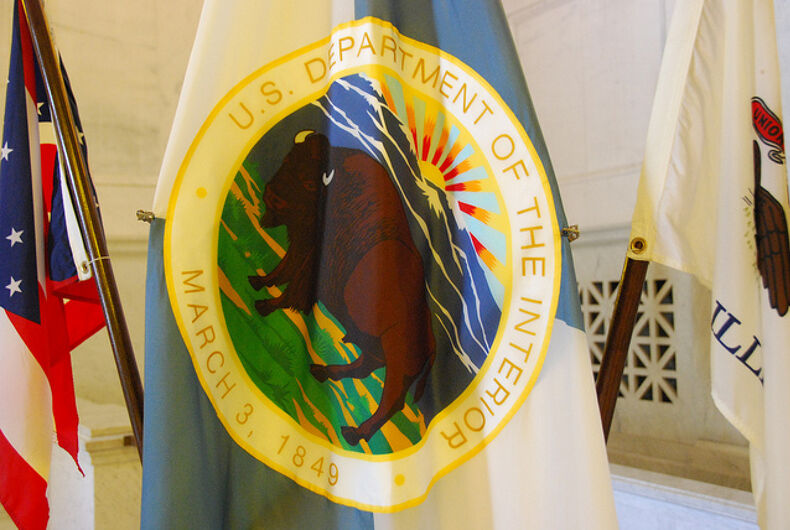 It isn’t hard to know when Interior Secretary Ryan Zinke is working in his office. While the profligate cabinet secretary wouldn’t allow the pride flag to fly over the Stonewall Inn earlier this week, he forces his staff to raise his personal flag outside his office whenever he’s inside working.

“Is he trying to send a message?” Retired Army Col. Steven Warren mused to the Washington Post. “Is he big on pomp and circumstance, or is this a case of ‘Look at me?’” Until last year, Warren ran the press operations at the Pentagon.

Zinke, who rode to work on a horse for his first day on the job, is currently under fire for wasting taxpayer money on extravagant trips with his wife on chartered jets paid for by the government. The agency’s inspector general has opened an investigation; four other Cabinet secretaries are also investigation for the same thing.

Zinke also stands out for commissioning commemorative coins bearing his name and the department’s seal to hand out to visitors. None of his predecessors or other Cabinet members have indulged in such a gratuitous display of narcissism.

The practice of flying a secretarial flag over department headquarters isn’t a new thing; the former military tradition has existed in one form or another since 1866. Secretary of State Rex Tillerson, for example, flies his departmental flag outside of the State Department, but doesn’t have it raised and lowered depending on his whereabouts.

Raising the pride flag over the Stonewall National Monument, however, wasn’t deemed acceptable by the Trump administration. It would have been the first time the flag had flown on federal property. The National Park Service had approved and sponsored the event, before abruptly pulling out.

It also, under Zinke’s direction, worked to certify that the flagpole adjacent to Christopher Park was not technically on U.S. government land before the pride flag was allowed to be flown – just not on land owned by the feds.