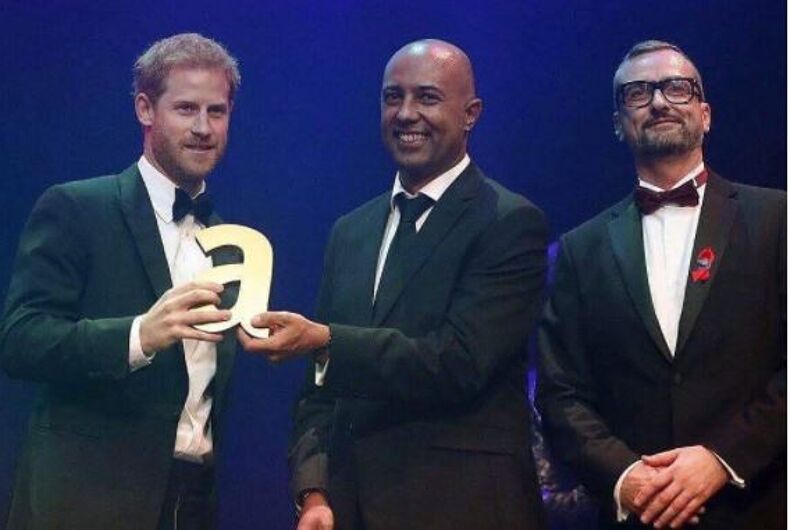 Prince Harry turned up to the Attitude Awards Thursday night to deliver an emotional tribute speech to his mother, Princess Diana, as he collected a Legacy Award on her behalf.

Princess Diana was posthumously honored with the award for her work in HIV/AIDS activism during the early years of the epidemic.

When she opened the Landmark Aids Center in the late ’80s, she shook hands with an HIV positive man. As this was a time when many were still wrongly convinced HIV could be passed on by casual contact, the small gesture was a huge moment in the effort to destigmatize the disease.

Prince Harry spoke of this historic moment in his speech.

Prince Harry accepting the Legacy Award at this year’s #AttitudeAwards on behalf of his mother Princess Diana’s HIV/AIDS activism 🌈 pic.twitter.com/ViVxCWdqnR

“She was still finding her way in public life, but she already felt a responsibility to shine her spotlight on the people and issues that were often ignored,” he said, noting that she was still in her twenties at the time.

“She knew that AIDS was one of the things that many wanted to ignore and seemed like a hopeless challenge. She knew that the misunderstanding of this relatively new disease was creating a dangerous situation when mixed with homophobia,” he continued.

“So when that April, she shook the hand of a 32 year-old man with HIV in front of the cameras, she knew exactly what she was doing. She was using her position as Princess of Wales, the most famous woman in the world, to challenge everyone to educate themselves. To find their compassion, and to reach out to those who need help, instead of pushing them away,” he said.

He added that he believes if she were still here today, she would still be fighting for the rights and lives of HIV/AIDS patience.

“I believe that she would be telling everyone across society, not just those most at risk, that with effective treatment being free and available in the UK, that we must all embrace regular testing, both for our own sake and for those that we love,” he said.

Prince Harry took an HIV test last year that was live streamed, and resulted in a large increase in HIV tests across the UK.

“She would be demanding that same access to treatment and testing for young people in Africa and across the world, and she would of course, of course, be standing alongside those who are living openly as healthy, happy, and HIV positive,” he continued.

“William and I are incredibly proud of what our mother achieved and we thank you for awarding her the Legacy Award,” he concluded to applause.

Before Bush campaigned against marriage equality, one of his daughters tried to change his mind

Interior Secretary wouldn’t fly pride flag over Stonewall. He flies his own flag instead.