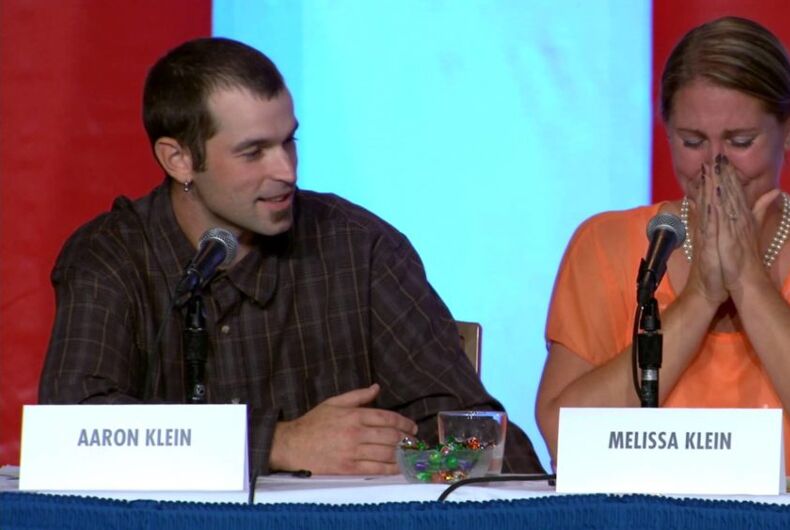 The former owners of a bakery shut down for refusing to make a cake for a lesbian couple’s wedding are still trying to get out of paying damages from a ruling made in 2013.

Aaron and Melissa Klein owned and operated Sweet Cakes by Melissa, in Oregon, and cited their religious beliefs when turning away Rachel and Laurel Bowman-Cryer.

The Bureau of Labor and Industries ruled in favor of the lesbian couple in 2015, citing a 2007 state law protecting the rights of LGBTQ people in employment, housing, and public accommodations. The Oregon Court of Appeals unanimously upheld that decision at the end of last year.

The Kleins, represented by First Liberty Institute, are petitioning the court to appeal the ruling that it must pay over $135,000 in emotional damages.

“Forcing artists to design and create custom wedding cakes to celebrate marriage rituals that are incompatible with the artists’ sincerely held religious beliefs abridges the freedom of speech and association protected by the First Amendment,” the petition states.

A similar case is currently being considered by the Supreme Court, on First Amendment grounds, as baker Jack Phillips of Masterpiece Cakeshop has said that being forced to make cakes for same-sex weddings would violate his right to free speech as an artist.

It argues the court should review the case in order to “determine whether entrepreneurs in Oregon can exercise their freedoms of speech, religious exercise and conscience; and whether due process will protect them against bias and prejudgment by ideologically motivated adjudicators.”

Attorney Nancy Marcus, of Lambda Legal, who wrote a friend of the court brief in support of Rachel and Laurel Bowman-Cryer, said the Kleins are simply trying to find a way to discriminate, in spite of the state laws barring such actions.

The Bureau of Labor and Industries released a statement, through spokesman Charlie Burr, saying it remains committed “to strong and fair enforcement of Oregon’s Equality Act so that Oregon remains open to all.

“Within Oregon’s public accommodations law is the basic principle of human decency that every person, regardless of their sexual orientation or gender identity, has the freedom to fully participate in society,” Burr added.

It’s not as if the Kleins don’t have the money, even though they have closed their shop. They raised gobs of money through crowdfunding after their case made headlines.

“It’s difficult to understand the Kleins’ unwillingness to pay the debt when they have, very publicly, raised nearly a half million dollars,” Burr said back in 2015. “They are entitled to a full and fair review of the case, but do not have the right to disregard a legally binding order.”

“The First Amendment is not a license to discriminate,” Marcus said. “We’re talking about baking a cake and selling it to somebody. It’s about providing a service on an equal basis.”

The Trump administration has made a number of moves to show religious folks they are going to do more to act in their interests if they wish to claim their beliefs prevent them from carrying out their jobs, or serving the public without bias.

Attorney General Jeff Sessions issued a memo instructing US attorneys, department heads, and federal agencies to give more weight to such concerns. The administration followed that up by appointing “religious freedom czars” to every U.S. Attorney’s office, and announced a new division of the Office of Civil Rights, giving healthcare workers the right to discriminate against the LGBTQ community and others.