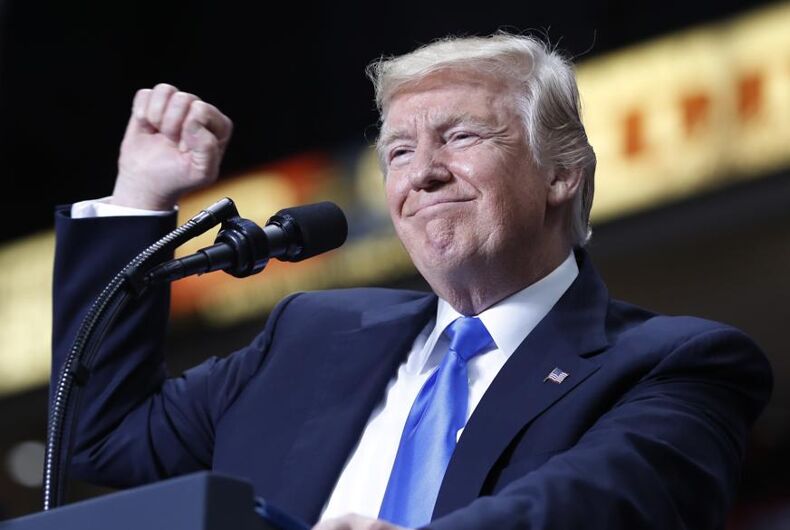 President Donald Trump pauses as he speaks during a rally, on Tuesday, July 25, 2017, at the Covelli Centre in Youngstown, Ohio. Photo: Carolyn Kaster/AP

The Department of Health and Human Services announced the creation of a new and dangerous division of the Office of Civil Rights today that will allow healthcare providers to deny care to LGBT people and pregnant women based on their religious beliefs.

The office is intended to give far right Christians a license to discriminate against LGBT people. The division would also be responsible for outreach and technical support for religious right organizations that oppose LGBT equality and abortion.

“President Trump’s Health and Human Services Department is playing with people’s lives in their latest attempt to upend LGBTQ rights,” Jerame Davis, Executive Director of Pride At Work, said in an emailed statement.

“This brand of so-called ‘religious freedom’ is a mockery of the fundamental religious protections provided by our Constitution. It is not ‘freedom’ of religion to use your faith as a weapon to harm others.”

Roger Severino, the head of the Department of Health and Human Services’ Office of Civil Rights, has actively opposed civil rights protections for minority communities. In his previous role as Director of the DeVos Center for Religion and Civil Society for the conservative Heritage Foundation, Severino spoke out against the regulations he is now tasked with upholding.

“It wasn’t enough to try to strip transgender Americans of their right to serve, roll back access to birth control, and attempt to defund Planned Parenthood. Now Trump, Pence, and their Republican cronies want to allow health care workers to discriminate and rip away access to medical care,” DNC Director of LGBTQ Media Lucas Acosta said.

“Any healthcare worker who has moral objections to providing medically necessary care to an entire vulnerable population is in the wrong line of work,” said Sarah Kate Ellis, president and CEO of GLAAD.

“Denying a transgender person – or any person – life saving care if they walk into an emergency room is far from a moral act, it is unjust and dangerous. Trump, Pence, and Trump’s appointees have tried time and again to establish blatantly bigoted policies that harm transgender and gender non-conforming Americans, and history will neither forget nor forgive this Administration’s attacks on its own people.”