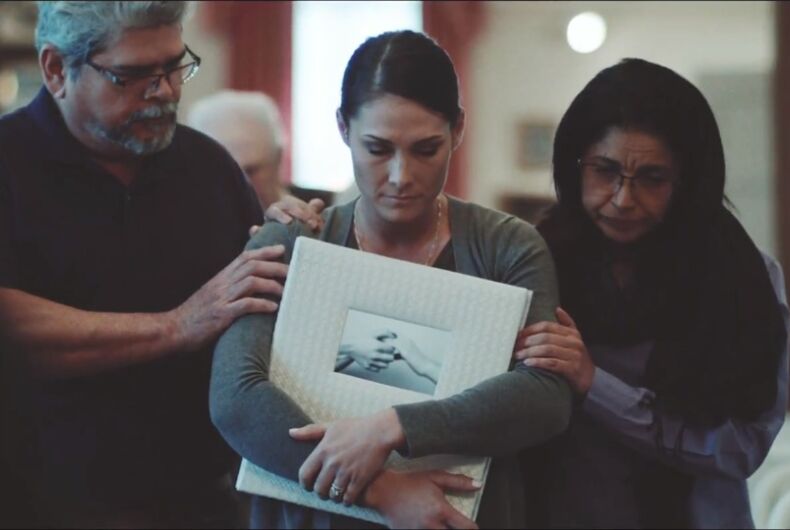 This scene from a new ad from the Open To All campaign is based on a real life eventPhoto: Screenshot/YouTube

The Supreme Court will soon decide if businesses will be handed a license to discriminate against the LGBTQ community. The court recently heard arguments in the case of a baker in Colorado, Jack Phillips, the owner of Masterpiece Cakeshop, who says same-sex marriage conflicts with his religious beliefs and that to be made to make a cake for such an occasion would violate his First Amendment rights to free speech.

If the Supreme Court decides to rule in his favor, it would result in businesses having the freedom to deny goods and services to certain members of the public, so long as they cite their religion as the basis for said discrimination.

One such example, inspired by a real event, is shown in the latest ad for the Open To All campaign, a project started by the Movement Advancement Project (MAP), in partnership with two dozen other advocacy organizations.

The ad, titled “Funeral Home,” shows a grieving widow turned away for services after the funeral director discovers she’s a lesbian.

“Just because a business serves someone doesn’t mean they share all of their customers’ beliefs. But the Supreme Court will soon decide a case that could create a right to discriminate in our nation’s constitution,” the ad states. “Do we really want to give businesses a right to tell people ‘we don’t serve your kind here?’ To hurt them and reject them in front of their loved ones?”

“Lesbian, gay, bisexual, and transgender people continue to be at risk for discrimination in their daily lives, even at their most painful moments, like when burying a loved one. People think discrimination like this couldn’t happen, but it does and it did—and this ad explains how a decision by the Supreme Court in favor of discrimination could make matters worse,” said Ineke Mushovic, executive director of MAP. “If the Masterpiece case gives businesses across the U.S. a license to discriminate, funeral homes, doctor’s offices, restaurants and more could legally turn away customers simply because of who they are.”

The spot was inspired by the 2016 Mississippi case where a funeral home refused service to Jack Zawadski upon learning his deceased spouse, Bob Huskey, was a man. Lambda Legal is representing Zawadski’s family in court.

Watch Zawadski talk about the real life tragedy the creators of the ad drew on in creating the spot.

This teen disappeared after a Grindr hook-up. His body was found 9 days later.