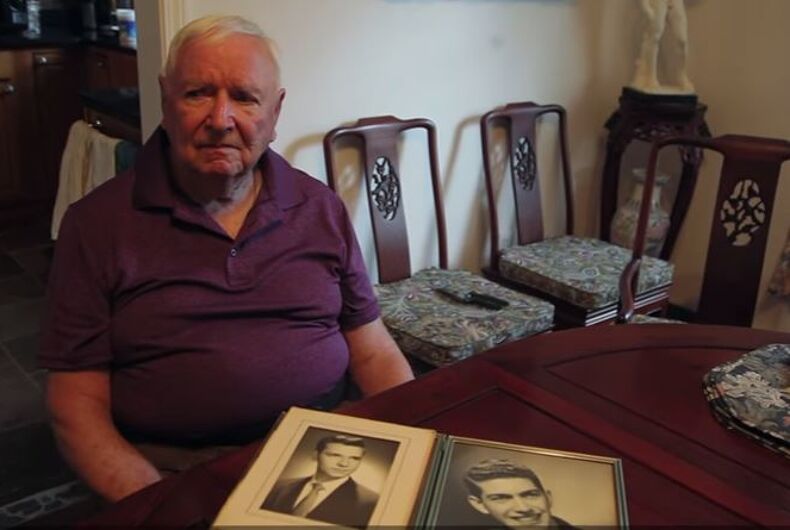 Jack Zawadski had been together over 50 years and got married once they were legally able to do so. Photo: Screenshot, YouTube

A gay man is suing a funeral home in Mississippi for refusing to take his husband’s body when they found out he had been married to a man.

Jack Zawadski’s partner of over 52 years, Robert Huskey, died in May 2016, and Zawadski’s nephew made funeral arrangements with the Picayune Funeral Home in Mississippi. The funeral home reportedly refused to pick up the body when they found out Huskey had been a gay man.

“I felt as if all the air had been knocked out of me,” the 86 year-old Zawadski said in a statement on Tuesday. “Bob was my life, and we had always felt so welcome in this community. And then, at a moment of such personal pain and loss, to have someone do what they did to me, to us, to Bob, I just couldn’t believe it. No one should be put through what we were put through.”

They had to take the body to another funeral home, nearly 100 miles away.

He is suing the funeral home, as well as the parent company, Brewer Funeral Services, breach of contract, intentional infliction of emotional distress and negligent misrepresentation, with help from Lambda Legal.

“John made all necessary arrangements before Bob’s passing in order to shield his…uncle from additional suffering and to allow friends to gather to support Jack in his grief,” Lambda Legal attorney Beth Littrell told NBC News. “Instead, Bob’s peaceful passing was marred by turmoil, distress and indignity, adding immeasurable anguish to Jack and John’s loss. This should not have happened to them, and should not be allowed to happen again.”

“Instead, Bob’s peaceful passing was marred by turmoil, distress and indignity, adding immeasurable anguish to Jack and John’s loss. This should not have happened to them, and should not be allowed to happen again.”

Mississippi has no protections for LGBTQ people to prevent such actions, and House Bill 1523 gives companies the right to turn away LGBTQ people if they have a religious reason for doing so. The law has been blocked from taking effect while an ongoing legal challenge plays out, which also includes Lambda Legal.

Yesterday, Democrats introduced the Equality Act of 2017 to provide completely, nationwide protections for LGBTQ people. On the same day, news broke that Trump is planning to sign a “religious freedom” executive order, similar to Mississippi’s HB1523.

Trump’s Army Secretary nominee may withdraw this week after backlash