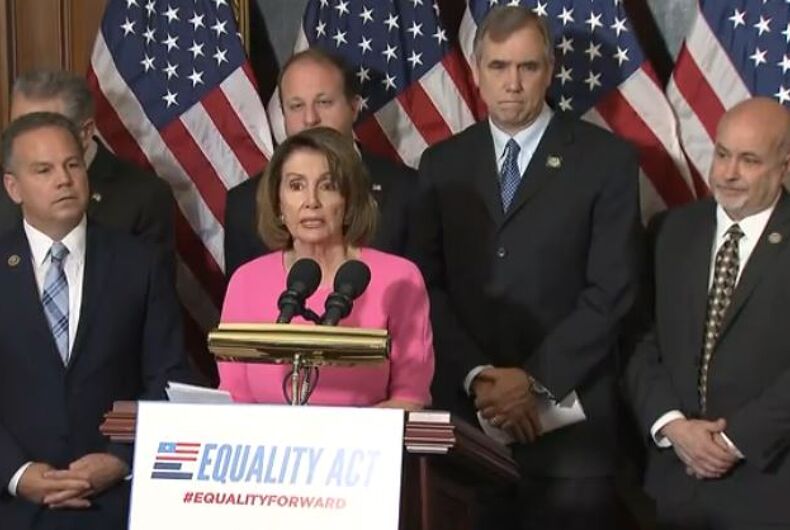 Democrats reintroduced the Equality Act in Congress today that would amend the Civil Rights Act of 1964 to include protections for LGBTQ people.

The bill, if passed, would include protections from discrimination on the basis of sex, sexual orientation, and gender identity in employment, housing, public accommodations, credit, jury service, and public education.

The bill was first introduced into Congress in 2015, and is reintroduced by sponsored Rep. David Cicilline, and Senators Jeff Merkley, Tammy Baldwin, and Cory Booker, as well as over 200 cosponsors.

“The Equality Act represents a simple idea, that everyone, including members of the LGBT community, is entitled to equal treatment under the law, and the right to live free of discrimination,” Cicilline said at a press conference on Tuesday.

“This value has defined our nation since our founding days, and over the years we’ve moved closer to this ideal for all Americans,” he continued. “But today in most states, you can get married on Saturday, post your wedding photos on Facebook on Sunday, and get fired from your job or kicked out of your apartment on Monday just because of who you are.”

“What is more fundamental to being an American than striving toward a just and equal society?” Merkley asked. “When it comes to members of our LGBTQ community, there’s no question that our nation has made significant strides forward. In just the past few years, we’ve seen the end of Don’t Ask Don’t Tell, had same-sex marriage recognized by the Supreme Court, but we have so far to go.”

“We’ve all been heartened by the 7th Circuit Court ruling that the Civil Rights Act protects Americans from workplace discrimination because of their sexual orientation,” Rep. Nancy Pelosi said. “Now we must pass the Equality Act to remove all doubt that sexual orientation and gender identity warrant civil rights protections, not just in the workplace, but every place.”

“The Trump administration has quickly proved that it will not defend or respect the rights of LGBT Americans,” Pelosi said.

“It is clear this White House will be an obstacle not an advocate in the fight for full LGBT equality, including trans equality now,” she added.

“No person’s fundamental rights should be determined by which side of a state line they live on,” said Human Rights Campaign President Chad Griffin in a statement. “The Equality Act will once and for all end the unacceptable patchwork of non-discrimination laws across this country that leaves LGBTQ people at risk. Every American should have a fair chance to earn a living, provide for their families, and live their lives without fear of discrimination. And at its core, that’s what the Equality Act is all about.”

“Everyone, regardless of who they are or the person they love, deserves equal protection under the law. Despite the significant progress we’ve made toward equality in the last decade, the Trump Administration’s attacks on LGBTQ people shows just how swiftly many of these hard-fought changes can be rolled back. That is why we need strong federal non-discrimination legislation for LGBTQ people in employment, housing, education, public accommodations, publicly funded programs, access to credit, and jury service,” said Rea Carey, Executive Director, National LGBTQ Task Force Action Fund in statement.

Coincidentally, today also saw news break that President Trump is expected to sign a “religious freedom” executive order that could be used as a license to discriminate against LGBTQ people in all of the areas in which the Equality Act would offer protection.

Watch the press conference announcing the introduction of the Equality Act of 2017 below.

Trump’s Army Secretary nominee may withdraw this week after backlash