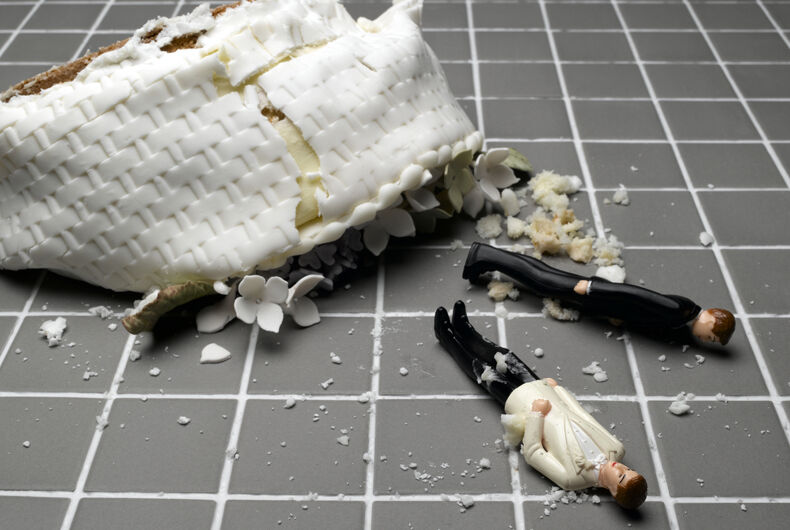 Bermuda has officially become the first country to revoke marriage equality for its citizens.

The British territory voted recently to replace same-sex marriage with domestic partnerships, but it needed the approval of Governor John Rankin, who had to give the royal ascent (Read: Rubber Stamp) to the legislation before it could take effect.

LGBTQ rights advocates were calling on the UK to veto the legislation, on the grounds that it takes away hard won civil rights.

“After careful consideration in line with my responsibilities under the Constitution, I have today given assent to the Domestic Partnership Act 2017,” Rankin said in a statement.

Although the country legalized marriage equality in 2017, both the Senate and House of Assembly passed the legislation dismantling marriage equality by wide margins, and the public also showed their support for ending LGBTQ rights by voting overwhelming in favor of the setback in a referendum.

“The act is intended to strike a fair balance between two currently irreconcilable groups in Bermuda, by restating that marriage must be between a male and a female while at the same time recognizing and protecting the rights of same-sex couples,” said Walton Brown, Bermuda’s Minister of Home Affairs, and a member of the party that proposed the legislation.

Condemnation for the move has come both from within the UK and Bermuda, as well as internationally, with talk of economic fallout coming from a potential boycott of the tourist destination beginning to grow.

“Governor Rankin and the Bermuda Parliament have shamefully made Bermuda the first national territory in the world to repeal marriage equality,” Ty Cobb, director of HRC Global, said in a statement. “This decision strips loving same-sex couples of the right to marry and jeopardizes Bermuda’s international reputation and economy.”

“I feel enormously disappointed,” 64-year-old married gay Bermudian Joe Gibbons told Reuters. “This is not equality, and the British government has obviously just said, ‘This is not our fight.’”

“I am deeply saddened by this reactionary move,” British Labour MP Chris Bryant told Bernews. “It takes away a right. It does add a right. And the UK government has fatally undermined its reputation for advancing equal rights and respecting the decisions of the court. In a hundred years Christians will be as ashamed of this as they are today about slavery.”

“It’s a sad day for Bermuda, it’s a sad day for human rights,” Winston Godwin-DeRoche, who, along with his now-husband Greg, brought forward the legal challenge that resulted in the Bermuda Supreme Court legalizing marriage equality, told the publication.

“This is an utterly disgraceful piece of legislation, which turns same-sex couples into second-class citizens, just a year after they won their equality through the courts,” Labour’s Shadow Foreign Secretary Emily Thornberry told PinkNews. “Following a year when Australia, Taiwan and Chile have joined the march towards marriage equality, this legislation is a giant step backwards.”

“For that to happen anywhere in the world would be shameful, but for it to happen in a British Territory, with the legislation signed by a British Governor, and permitted by a British Foreign Secretary, is nothing short of a scandal,” she continued.

“Intervening in the laws of a British Overseas Territory is an exceptional step but, in this case, one the FCO must take given an unelected governor wants to send Bermuda back to the dark ages on LGBT rights,” added Liberal Democrat leader Vince Cable.

A spokesperson for the Foreign & Commonwealth Office (FCO) of the UK called the decision by Bermuda “disappointing,” but stressed that it had no choice but to give the rubber stamp A-OK:

The introduction of same–sex marriage last year put Bermuda among the most progressive countries in the region in terms of LGBT equality. It is therefore disappointing to see them taking a step backwards and removing the right for same-sex couples to marry in Bermuda.

The Governor of Bermuda took extensive advice before making a decision on whether to grant assent to the Domestic Partnership Bill which was democratically passed by the Parliament of Bermuda.

The UK regrets that Bermuda has chosen this course, but we also respect and believe in their right to self-government.

Twitter is now full of people saying they will avoid traveling to the country in the future as a result of the legislation (in fact, it’s trending):

It is with great sadness that I will no longer be going to @Bermuda for my annual weeklong beach vacation. Feel free to invite me back when you stop discriminating against #LGBT people. https://t.co/QvcV6Mb4uJ

No surprise. Only place I’ve ever been refused service because I was gay. https://t.co/9IiHxoOiVl

I should add, we were on our honeymoon and the barman wouldn’t serve us. So yeah, don’t waste your money in Bermuda. https://t.co/9IiHxoOiVl