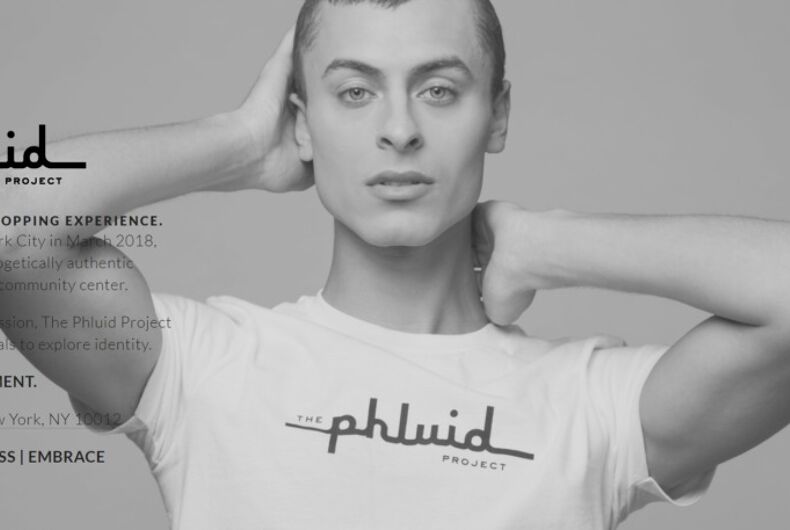 The Phluid Project will open later this year in New York City.

There is a growing trend in fashion to offer clothing options that think outside the gender binary. The latest addition to that movement comes in the form of The Phluid Project, which is planning to open a “gender free” clothing store in New York City, at 684 Broadway, in March.

Owner Rob Smith shared the news in a Facebook post, where he explained that the idea grew out of his own self-discovery.

“Last year, On March 1, 2017, I began a pilgrimage that would take me on a journey of self discovery as I gained a deeper understanding about who I am and where I fit in this world,” Smith wrote. “On this journey, I gained clarity on how I want to live my life. My vision, to live a more honest, altruistic and authentic life, merging my profession and passion. I envisioned creating a space where I could leverage my 30 years of fashion with decades of work fighting for human rights.”

“This result of this discovery is of the called The Phluid Project,” he continued. “Phluid (fluid), because nothing is constant and we should always be challenging ourselves and eliminating boundaries. PH, because when we are balance, life is in balance, creating peace, love and acceptance of ourselves and others. Project, because it is a collaborative effort and I’m going in with a plan, but willing to learn and discover along the way.”

Related: Target hits back against the binary with gender neutral clothing line

“The Phluid Project is part fashion, part art, part community space, part conversation, part exploration and completely gender-free,” he added. “We will be the first ever Gender-free Store in the world, with a website to service our consumers product and conversation around the world. Half of the product is created by me and my team, with the other half from some of the worlds greatest and most innovative brands offering apparel, accessories, shoes, cosmetics and gifts.”

Come see the amazing art of @jeremyville, gracing our exterior while the interior is under construction #jointhemovement #jeremyvillecsa #phluidproject #genderfree

“We open for business March 1, 2018…ironically one year after this journey began,” he wrote.

“This is a revolutionary retail movement for a new generation,” he explained. “Recognizing the rising voice of young people and their growing rejection of binaries. The Phluid Project is committed to redefining gender labels and creating a space where strangers, allies, friends -people- can be unapologetically themselves.”