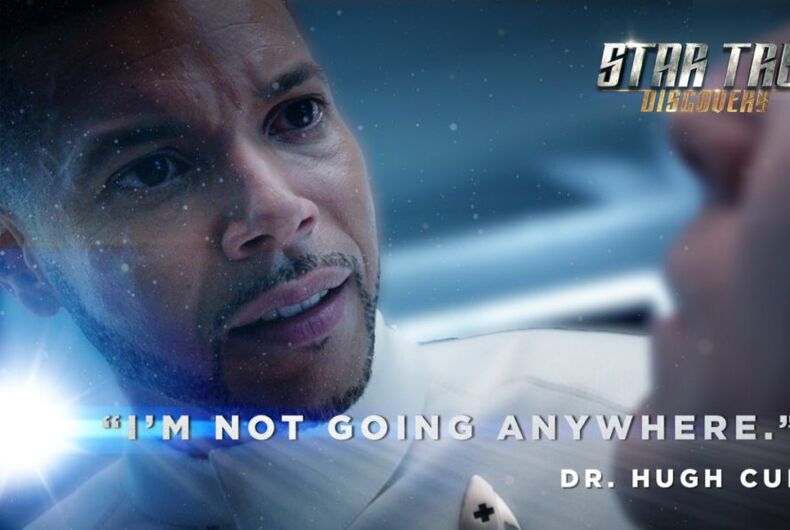 For a second, the future looked a whole less gay.

Spoiler warning for those who missed Sunday’s Star Trek: Discovery!

In the opener for the second half of the first season, the crew found themselves trapped in the fabled Mirror Universe, an occasional Trek trope that features a sort of anti-Federation and evil versions of most of our favorite characters. The Discovery landed there courtesy of chief engineer and out gay man, Lt. Paul Stamets (played by Anthony Rapp), who suffered some kind of seizure while navigating the ship’s experimental spore drive. Hey, it is Star Trek folks.

Paul also happens to be the first canonical out-gay Trek character (and no, that lame, half-assed hug Sulu gives another guy in Star Trek Beyond does not count!), and the boyfriend of the ship’s chief medical officer, Dr. Hugh Culber (played by silverfoxy Wilson Cruz).

In a sick twist though, Hugh, like so many gay characters in TV and film – particularly those with boyfriends and stable careers – met his end at the hands of crewman Lt. Ash Taylor (the hunky Shazad Latif), a closeted Klingon in the midst of a psychotic break.

Naturally, the outrage took off at warp speed, with the internet decrying Discovery and its producers (which include the out-gay Bryan Fuller and Aaron Harberts) for falling into one of the worst traps in TV and film: kill the gay. Network CBS All Access went into full damage control mode, with Harberts and Cruz both teasing that Hugh would return, and that his “death” would mark the beginning of a new and important story arc.

If said story arc just includes Hugh appearing as on occasional ghost or alternate timeline character (a la Tasha Yar on Star Trek: The Next Generation), don’t call us satisfied.

Hugh Culber, and Cruz, gave the cast a certain tenderness it otherwise lacked, especially in balancing out the abrasive personality of boyfriend Paul. Losing him would do more that just fall into the “kill the gay” trap; it would rob the show of one of its best new characters.

CBS All Access, we’re giving you extra time, but you better have a point to all this, and it better be good. You better get to it fast, too…