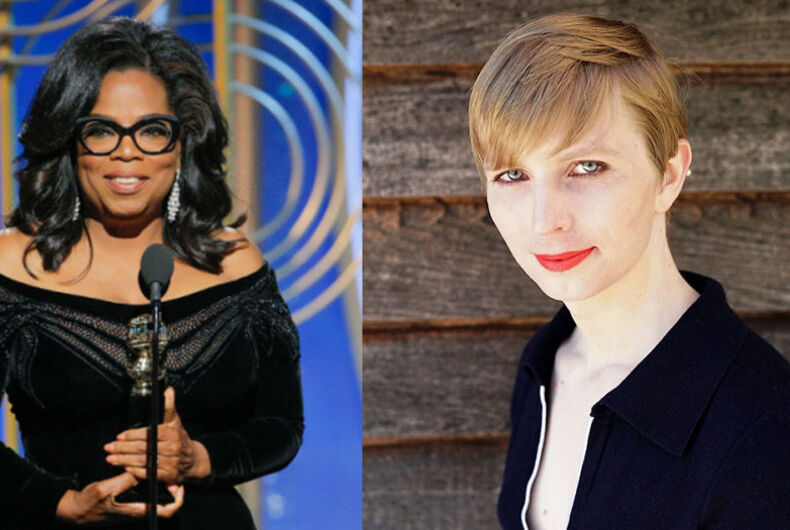 Oprah Winfrey is reportedly considering a run for president, while Chelsea Manning is challenging the incumbent Democrat in Maryland for a Senate seat.Photo: Oprah via Screenshot, Manning by Tim Travers Hawkins (CC 4.0 license)

When people started buzzing about Oprah Winfrey potentially running for President after dropping some hints and delivering a “candidate-esque” speech at the Golden Globes, I just rolled my eyes.  It seemed mostly like idle chatter in a time when Democrats are looking desperately for ways to break the Republican strangle-hold on power at the state, local, and national level.

But when Chelsea Manning announced that she would be challenging Democrat Ben Cardin for his Senate seat in the Maryland primaries, and significant number of people on my news feed came out cheering for her to challenge the “Democratic Establishment,” I knew we had a problem.

Namely, that problem is that people, both Democrat and Republican, assume that working at the highest levels of government requires little to no relevant experience in order to be effective. Much of the public assumes that a politician with good intentions and a similar worldview to their own are enough to produce the results they want out of the government. At the same time, there has been a rising level of distrust directed at subject matter experts by conservatives. The candidacies of Winfrey and Manning could be a sign that this distrust is now seeping into liberal circles.

Putting aside the fact that Manning has effectively zero chance of unseating Senator Cardin, there is no question that Manning would be less effective than him at advancing key progressive agenda items.

Cardin is already considered one of the most liberal members of the Senate, and has a perfect legislative score from the Human Rights Campaign on LGBTQ issues. He has a law degree, and has served as a legislator at the state and federal level since 1979. He knows how the system works, he knows the people, he knows the parliamentary rules, and he knows how to write laws that will pass judicial muster. There is nothing to suggest that he is temperamentally unfit for the job either.

In short, he is competent and qualified.

Manning’s qualifications are a high school diploma, and having spent the better part of the last decade in a federal prison in solitary confinement. She was so cut off from the outside world that she wasn’t even allowed to have Cosmopolitan magazines in her cell.

Her temperamental fitness is suspect as well, based on accounts of her time in boot camp and her social media posts. Her felony conviction for deliberately mishandling classified materials means that if she was somehow elected, she would not be allowed to view classified materials as a Senator. This would severely limit her ability to be effective, especially since much of the information on the Russia probe is derived from classified sources.

In other words, she would potentially have to vote on impeachment proceedings where she wasn’t allowed to look at the evidence.

This isn’t about whether Manning’s actions were right or wrong, whether I like her or I don’t. This is simply an assessment of whether she is likely to be more effective than the man she would theoretically replace.

The answer is, “Absolutely not.”

Likewise, Oprah Winfrey may have her heart in the right place, and a great deal of business savvy, but that’s no substitute for experience in governance.  “Business savvy” was the primary qualification of Evan Meacham and Rick Snyder prior to being governors of Arizona and Michigan, and Donald Trump prior to being in the White House.

Additionally, over the years Oprah has promoted charlatans, mysticism, and even a few outright hoaxes (remember the Satanic Daycare Panic of the ’80s and ’90s?) This does not suggest someone who would apply evidence-based analysis to policy and priorities within a White House, which is what we need.

This is not to say that there aren’t political novices well qualified for office. Danica Roem knew her district, local issues, and Virginia politics inside and out as a veteran reporter. Alexandra Chandler is a lawyer who spent over a decade working on intelligence and national security issues. Retired Lieutenant Colonel Amy McGrath is a Naval Academy graduate, Marine Corps F/A-18 fighter pilot, Academy professor, and spent two years working inside the Pentagon. Tobi Beck is combat veteran with both a PhD and a Juris Doctorate (law degree). I have no doubt that these women running for Congress have a solid understanding of military, foreign policy, and national security issues.

Additionally, in each of these cases, they are challenging sitting Republicans, not Democrats with a strong track record on the issues that matter to progressives.

The current state of affairs in Washington, D.C. reflects what happens when people are elected, or appointed, regardless of relevant experience. At the State Department, 60 percent of career ambassadors have left. Our allies are questioning our leadership as a nation. We’ve just seen the first government shut down to ever occur when a single party controlled the House, Senate, and White House. EPA employees are leaving in droves, according to The New York Times. The NSA has similar problems.

Decisions made based on ideology, and not actual research, can have profound effects on individuals too. Four district courts have now ruled that the ban on transgender servicemembers was done without any relevant study or evidence.

President Trump was shocked by how much more difficult being President was than he imagined. Secretary of State Rex Tillerson has reportedly been frustrated by the fact that the State Department doesn’t operate like a company. Secretary of Energy Rick Perry reportedly didn’t even know what his department does until a month before he took the reins.

It came as small surprise that regulators appointed by the Trump Administration rejected Perry’s plan to favor coal and nuclear over other power sources. Secretary of Education Betsy DeVos, who did not have any experience in government, teaching, or school administration prior to her appointment, has reportedly been frustrated over the fact that she had far less authority than she expected.

Working with incredibly complex systems requires years of training, experience, and expertise. We don’t let people perform brain surgery or fly Boeing 787’s without proof that they are more than competent to do so. And yet, we are somehow willing to hand over the keys to one of the most complex governmental systems in the history of mankind based on what amounts to a glorified popularity contest.

A question I would ask progressives is, do you approve of how things are going in Washington, D.C.? What we see happening there is in great part due to people who have little relevant experience in their jobs, but do have an ideology which they use as guidance. Doing exactly the same thing, but with Chelsea Manning or Oprah Winfrey, is giving in to the same impulses that got us to where we are today.

Russia just had its first same-sex marriage. Now the state wants to shut it down.