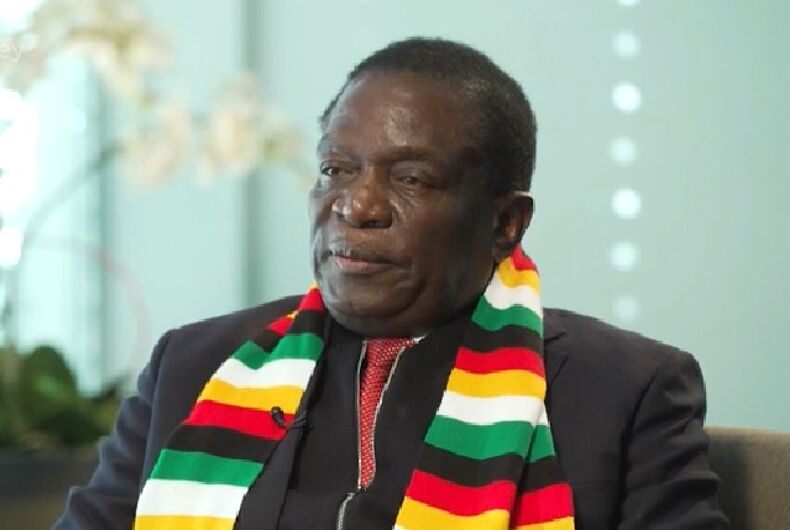 Zimbabwe’s new president, Emmerson Mnangagwa, has said that he will not take any action to legalize gay sex in the country.

Mnangagwa assumed office in November of last year, taking over from Robert Mugabe, who led for 37 years. He had served as vice president under Mugabe, was dismissed in November of 2017, in what many saw as an attempt to clear the way for his wife to lead, prompting a coup d’état. Mugabe was staunchly anti-LGBTQ.

During his tenure, he said gay people should rot in jail, or even get beheaded unless they can somehow figure out how to procreate if locked together in a room. He also once threatened to kick out ambassadors who come to the nation looking to promote LGBTQ rights.

The new president, and Mugabe’s former right-hand man, made no such damning proclamations during a recent CNN interview, but he did make it clear that he was not going to advocate for gay rights in the country.

“It is time for President Mnangagwa to prove to ordinary Zimbabwean and the world at large that he is different from despotic Mugabe by vowing to protect all persons irrespective of their sexuality and gender,” African LGBTQ rights advocate Edwin Sesange told Gay Star News.

“The laws prohibiting same sex relationships are colonial hangover that should be abolished by independent countries. President Mnangwa should defend the right to non-discrimination as stipulated in the Zimbabwean constitution.”

LGBTQ Zimbabweans cannot reasonably expect the United States to come to its rescue and apply pressure, considering the Trump administration has little ground to stand on with its continued assault on its own LGBTQ community at home.

To make matters worse, with President Trump reportedly calling African nations “shithole countries,” won’t make matters any easier. Not only does it undercut any attempts to communicate positively with those nations, it makes an already perilous situation for asylum seekers that much more difficult.

The United States has already reportedly shut the door to asylum seekers attempting to escape the anti-LGBTQ purge taking place in Chechnya. Countries that have taken in Chechen refugees include Lithuania, France, and Germany.

Elsewhere in Africa, Ghana’s new president, Nana Akufo-Addo, has said that marriage equality is “just a matter of time,” in his country, but he also said those who wish to see the laws change must be the ones to push for it to become a reality.

“Like elsewhere in the world, the activity of individuals and groups [can make it happen],” Akufo-Addo said. “At the moment, I don’t feel, I don’t see that in Ghana there is that strong current of opinion that is saying this is something that we need [to] even deal with,” he said. “It is so far not a message that is on the agenda.”

In the Caribbean, an upcoming court ruling in Trinidad and Tobago could legalize gay sex in eight different countries.