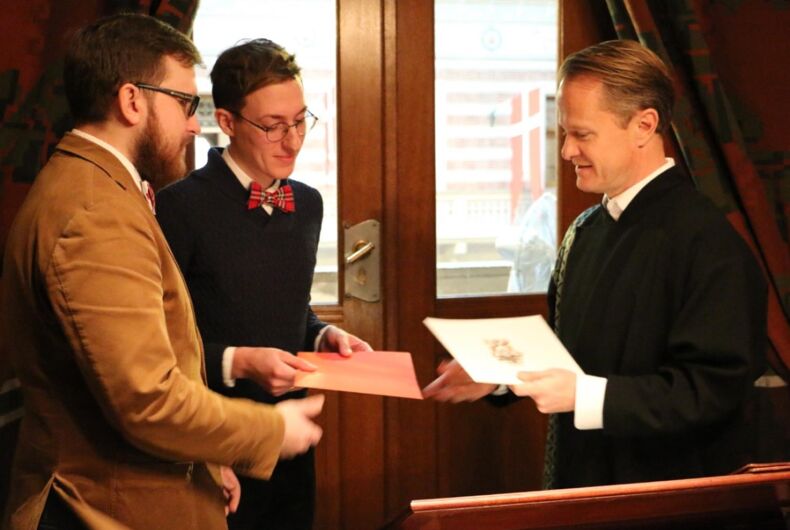 A gay couple got their marriage registered in Russia, in what local media is calling the country’s first legal marriage between two people of the same sex.

Eugene Wojciechowski and Pavel Stotsko, both Russian citizens, got married on January 4, 2018, in Copenhagen, Denmark. They took their Danish registration forms and notarized translations to the registry office in Moscow to get the marriage page of their passports stamped.

Stotsko and Wojciechowski told Rain TV that it only took five minutes for the registrar to stamp their passports “without superfluous questions and no change in his face.”

A spokesperson for the registry office told Rain TV that the marriage was approved because there was no condition in Article 14 of the Family Code that prevented it. That article prohibits marriages involving people who have a close family relationship, people who are currently married, and people who have been designated mentally incapable by a court of law.

Article 158, which is about the recognition of foreign marriages, says that a marriage that’s legally performed in another country can only be refused in Russia if it violates a condition in Article 14, even though there are other passages in the Family Code that imply that a marriage includes a man and a woman.

“It turns out that it was not necessary to fight,” the couple said in an interview. “It’s a shock.”

Well, they might have spoken too soon. Internal Affairs Minister Vitaly Milonov told the Parliamentary Newspaper that he had heard about the case, and he is looking for a way to stop marriage equality.

“We will urgently create a working group in the State Duma [the lower house of the Russian legislature], which will amend the Family Code as to which marriages can be recognized in Russia,” Milonov said.

And since homophobes are never original, he went on to compare marriage equality to bestiality.

“Somewhere in Somalia, they will begin to recognize marriages with farm animals,” he said.

A 2013 survey found that 74% of Russians do not believe that homosexuality is acceptable. 85% of Russians oppose marriage equality.

Oprah for president? Chelsea Manning for Senate? We can & we must do better.