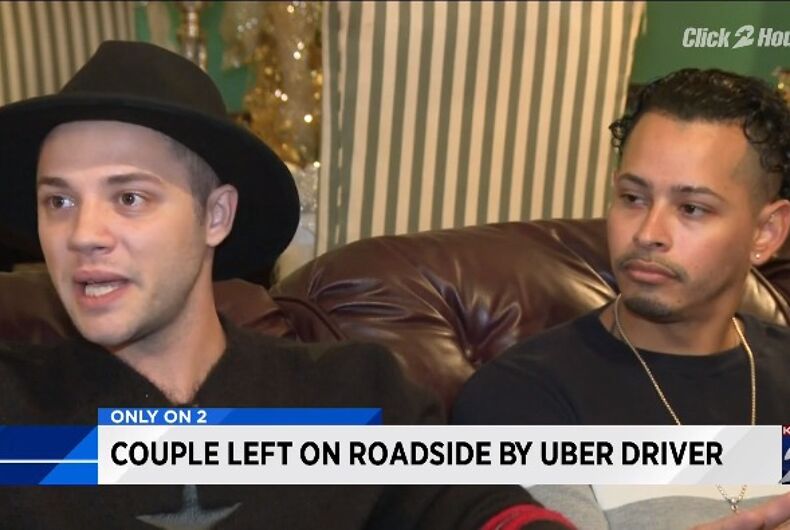 Randall Magill and Jose Chavez were kicked out of an Uber on New Year's Eve in Houston. Photo: Screenshot/KPRC

A gay couple said they were kicked out of an Uber on New Year’s Eve for kissing, and left on the side of the Southwest Freeway in Houston.

Randall Magill, 28, and his fiancé Jose Chavez, 26, who were engaged in early December in the Dominican Republic, said they were attending a family gathering at a friend’s home and wanted to be safe after both had been drinking. They got an Uber, as they had many times before, but this time things went bad when they said they gave each other a peck on the lips and were told that was where their ride would end.

“I wasn’t doing anything that I wouldn’t have done in public. I’m not going to embarrass myself or my fiancé by any means,” Magill told local NBC affiliate KPRC. He said the driver drove a minivan, and they were divided by an aisle.

Still, the fleeting moment of affection between the two was more than the driver was willing to accept.

Magill said he and Chavez were left besides a concrete sound barrier, and had to walk under the interstate bridge and onto the other side of the highway to get another Uber to take them home.

He said that he had never experienced that kind of treatment before, and said that this will be his last time using the ride sharing app.

Uber has a nondiscrimination policy that protects against discrimination of riders and drivers “based on race, religion, national origin, disability, sexual orientation, sex, marital status, gender identity, age or any other characteristic protected under applicable federal or state law.”

It has said that both the rider and driver reported the incident and that they are investigating.

KPRC did some digging into the Uber Community Guidelines to discover and note that Uber has a policy that deals with public displays of affection.

“As our community guidelines make clear, you shouldn’t touch or flirt with other people in the car. As a reminder, Uber has a no sex rule. That’s no sexual conduct with drivers or fellow riders, no matter what. And you should never hit or otherwise hurt a driver or fellow passenger,” it reads.

A similar incident occurred in London early last year, when a gay man reported that he and his friends had been kicked out of an Uber when two of them, both males, kissed.

And last month, Aja Kween, of RuPaul’s Drag Race fame, reported getting kicked out by a Lyft driver in New York City for kissing her boyfriend.