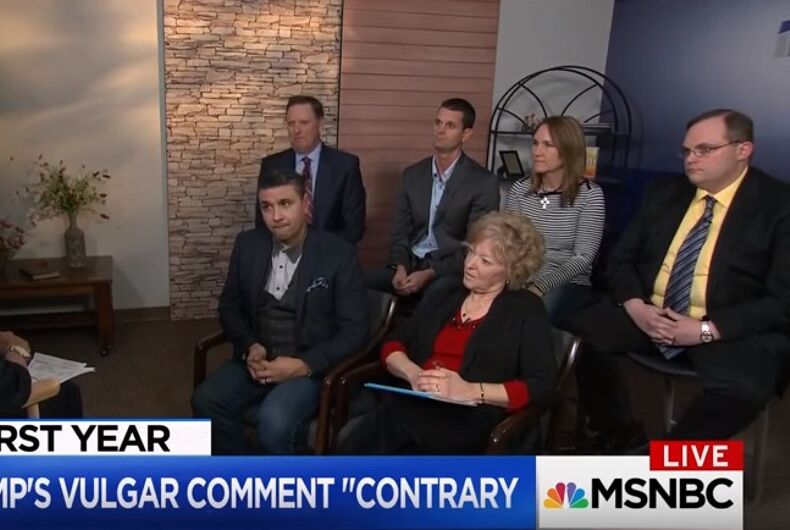 A group of evangelical Trump supporters explain their stancePhoto: MSNBC/YouTube

Evangelical Christians played a huge part in sweeping Donald Trump into the White House, overlooking rhetoric and a lifestyle that most would condemn if not for the fact of it coming out of the Republican candidate for president’s mouth.

And while his support has dropped among white evangelicals, according to a survey from the Pew Research Center from last month, most of them remain on board.

MSNBC hosted a panel discussion with six such voters, who said they were standing by President Trump, despite alleged racist comments about Haiti and African nations as “shithole countries,” and behavior that is anything but Christlike.

Pastor Ryan Jorgenson of Harvest Bible Chapel said he was pleased with Trump’s policy making, but acknowledge that he has serious personality flaws.

“The character is an issue, at times,” he admitted, noting the comments against other countries Trump is said to have uttered in the Oval Office.

“That is contrary to what Christ would stand for in the Bible and what Christians would be about,” he said.

“I think that there’s a lot of frustration, both with him and with the press. A lot of sense of, people are at the point where they are beginning to not care,” said Conservative Review writer Steve Deace.

Conservative activist Vicki Crawford explained that the support was opportunistic, something Trump should well understand.

“If everybody who disagrees with him walks away from him, then we just lost our voice too, and that’s not wise,” she said.

Deace suggested a way to curry favor with Trump would be to “appeal to his vanity.”

“I would tell him, ‘You’re not serving your ego well,'” he said. “Go outside of the beltway, do more rallies, connect more with actual, everyday people who put you in the White House.”

Bob Vander Plaats, of The Family Leader said he wants to see Trump do more on so-called “religious liberty,” so that people who own businesses and wish to discriminate against the LGBTQ community are free to do so without repercussion.

Attorney General Jeff Sessions has already instructed the Department of Justice to give more weight to such complaints, and the Department of Health and Human Services announced yesterday the creation of a new division of the Office of Civil Rights to give healthcare workers the right to deny services to LGBTQ people.

Retired teacher Joan Acela summed it all up by telling Trump to just consult the Bible for all the answers.

Watch the mental gymnastics and cognitive dissonance circus below.