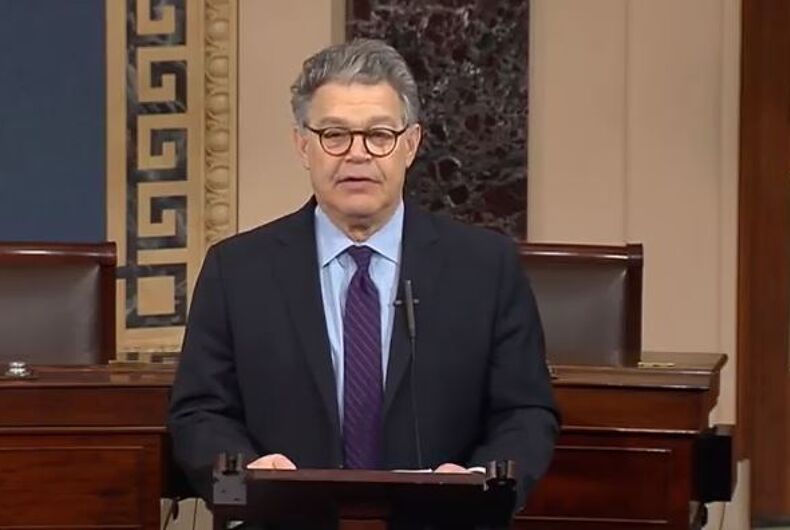 Sen. Al Franken announces he will resign "in the coming weeks."Photo: YouTube Screenshot

Senator Al Franken announced today that he will resign after numerous women have come forward to accuse him of groping them.

“I am proud that during my time in the Senate I have used my power to be a champion of women. And that I have earned a reputation as someone who respects the women I work alongside every day. I know there’s been a very different picture of me painted over the last few weeks, but I know who I really am,” Franken said.

“Serving in the United States Senate has been the great honor of my life,” he continued. “I know in my heart that nothing I have done as a senator, nothing, has brought dishonor on this institution. And I am confident that the ethics committee would agree. Nevertheless, today I am announcing that in the coming weeks I will be resigning as a member of the United States Senate.”

“I, of all people, am aware that there is some irony in the fact that I am leaving while a man who has bragged on tape about his history of sexual assault sits in the Oval Office, and a man who has repeatedly preyed on young girls campaigns for the Senate with the full support of his party,” Franken said, referring to President Trump and Roy Moore.

“But this decision is not about me. It’s about the people of Minnesota,” he continued. “It’s become clear that I can’t both pursue the ethics committee process and at the same time remain an effective Senator for them.”

Minnesota Gov. Mark Dayton will now appoint someone to replace Franken. A special election will then be held in November 2018, and the winner will serve the remaining two years of his term.

The announcement comes on the heels of another Democrat, Rep. John Conyers, of Michigan, announced he would step down amid multiple accusations of sexual harassment.

Rep. Ruben Kihuen, of Nevada, is also being urged to resign, as a former campaign staffer has said he sexually harassed her.

Watch Franken make his announcement below.