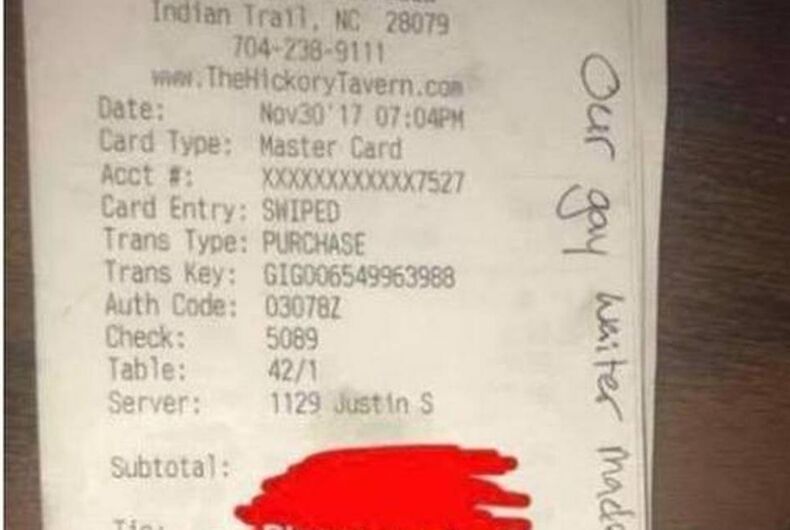 The Hickory Tavern receipt that got a gay server fired.Photo: Facebook

A North Carolina sports bar, Hickory Tavern, did not react to a homophobic customer’s anti-gay slurs well. Instead of condemning the customer, the chain fired the waiter who was left a nasty note on the customer’s bill.

“Our gay waiter made me wanna throw up my food!” the patron wrote on the receipt. “Ruined my experience tongt [sic]. Will not be back!”

The server was fired for posting a photo of the receipt on Facebook. The company says it has a confidentiality policy that prohibits employees from posting photos of customer receipts online.

But the waiter wasn’t the only one commenting or posting a photo of the receipt to social media once the bar’s reprehensible decision came to light. Another customer also posted it, saying “A sweet young man was fired from his server job at Hickory Tavern after sharing a bigoted note left by a customer. Let’s help him find a new job.”

After the Charlotte Observer emailed the chain to inquire whether they had actually fired an employee who was demeaned on the job and social media reactions started pouring in, the bar decided to backtrack.

“We strongly condemn the insults directed at one of our team members in remarks left by a patron on their credit card receipt,” Hickory Tavern said in a statement to the Observer. “We value diversity and do not discriminate on the basis of race, gender, sexual orientation or for any other reason. We also value the privacy of our patrons, and posting of credit card receipts violates our confidentiality policy.

“Although the team member was initially terminated for violating this policy, after further discussions with the team member, we made the decision to offer his job back. We strive to strike the right balance between supporting our team members and protecting the private information of our guests.”

Here’s hoping the employee gets a new job where his employer’s first reaction is to be angry at a bigot who insults their staff instead of punishing the employee for being upset about it.