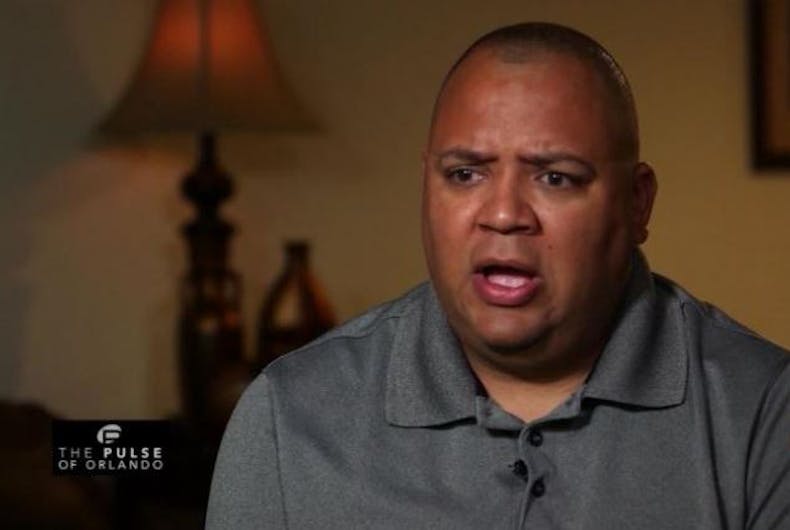 Omar Delgado learned this week that he will lose his job.Photo: CNN Screenshot

A police officer who was one of the first responders to the Pulse nightclub in Orlando during the shooting in June 2016, celebrated as a hero for saving one of the victim’s lives, is being fired.

Cpl. Omar Delgado has been diagnosed with post-traumatic stress disorder (PTSD) after what he saw that night, and was ultimately unable to return to patrol duty. Instead, he had been assigned a desk job.

Now, he won’t even be able to keep that, as Town Council voted unanimously Tuesday night to pay him around $1,200, before taxes, in accrued sick leave, and then say goodbye to him for good after December 31.

Related: One year later: Checking in on a Pulse survivor, 911 operator & first responder

The Orlando Sentinel reports Delgado will be let go six months before he would have qualified for a full pension after serving citizens for 9.5 years. As a result, he will only receive just over 40 percent of his salary, starting in ten years, instead of allowing him to collect over 60 percent of his salary, with benefits, for life.

The Eatonville Police Department declined to comment on the reason for Delgado’s termination, and the mayor followed suit, citing privacy laws.

Mayor Eddie Cole asked on Tuesday’s meeting why funds from the OneOrlando Fund weren’t being used to help officers and their families.

“This town, as well as me, cares about people,” he added. “But some pictures are bigger than we all know.”

Angel Colon, the man whose life he saved, attended the meeting and afterward expressed his upset to the media.

“It’s a horrible feeling because this man, Omar, has been there for me ever since June 12,” he said. “He’s the person who saved my life.”

On the same day as the decision to terminate Delgado, a bill requiring coverage for treatment for first responders with PTSD in workers compensation insurance advanced in the Florida Senate.

Trump has done the impossible. He’s united the Middle East (against us).