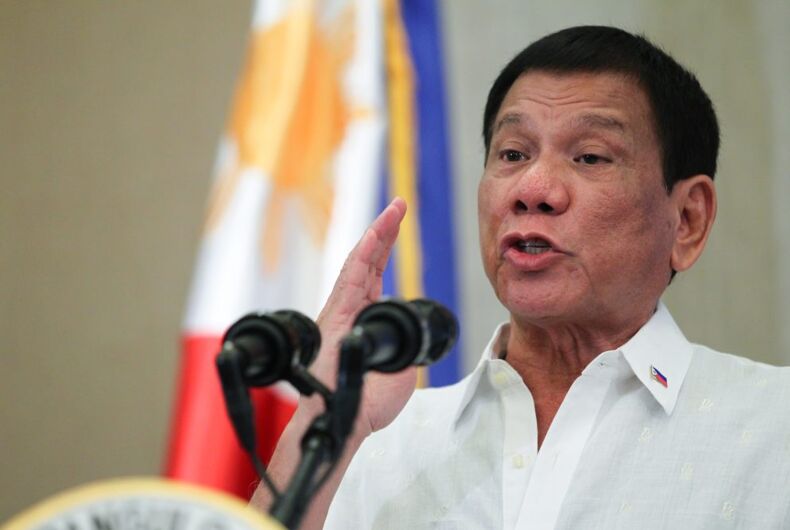 Philippine President Rodrigo Duterte said on Sunday that he is now in support of marriage equality after previously opposing it.

“I said I am for (same) sex marriage if that is the trend of the modern times,” he declared to a group of LGBTQ people in his hometown of Davao City. “If that will add to your happiness, I am for it.”

He also pledged to protect gay rights, and asked for a nominee to be a representative for the community to work in his government, Reuters reports. He gave them until the “second week of January” to choose someone.

The president once joked that he was gay but reformed, and that selfies with men might turn him gay. He also went after American ambassador Philip Goldberg, after he criticized Duterte for making a rape joke, calling him gay and a “son of a whore.”

He has also criticized other countries that have already legalized same-sex marriage in the past, bringing it up when his country’s brutal anti-drug war is mentioned by representatives of those nations.

The Philippines is majority Roman Catholic, and his pro-marriage equality statements are expected to upset bishops there, who also oppose his bloody approach to eliminating drug use.

“Why impose a morality that is no longer working and almost passed?” Duterte asked Sunday. “So I am with you.”

How the ‘Christian machine’ destroyed an evangelical writer who denounced Trump

Who will be LGBTQ Nation’s 2017 Newsmaker of the Year?