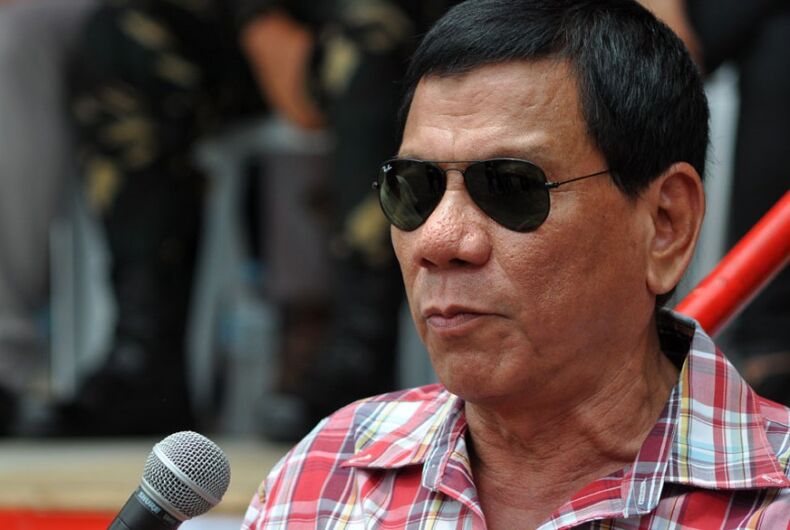 Philippines President Rodrigo Duterte may be newly elected, but he’s not wasting any time making friends. Duterte, 71, ran a Trump-like campaign for office – including using profanity and stereotypes to win votes.

After American ambassador Philip Goldberg criticized Duterte during the campaign for making a rape joke, the new president has made sure everyone knows the slight won’t be forgotten. He called the ambassador a gay “son of a whore.” Goldberg is not known to be gay; Duterte used a Taglog slur to indicate that he meant it as an insult.

“As you know, I’m fighting with (US Secretary of State John Kerry’s) ambassador. His gay ambassador, the son of a whore. He pissed me off,” Duterte said according to the Guardian. “He meddled during the election, giving statements here and there. He was not supposed to do that. That son of a bitch really annoyed me.”

The former mayor of Davao City, then-candidate Duterte was asked about the rape and murder of an Australian missionary in his city. Instead of showing sympathy, he made a sexist joke.

“What a pity,” he said. “What came to my mind was, They raped her, lined up for her. I was mad because she was raped? Yes. That’s one reason. But she was so beautiful. The mayor should have been first.”

Asked about the response, Australia’s ambassador expressed their revulsion that Duterte would “trivialize” violence against women. When CNN asked Goldberg about the “joke,” he responded in a similar manner, building off the Australian ambassador’s statement.

“I can only agree with the colleague from the Australian Embassy. Any statements by anyone, anywhere that either degrade women or trivialize issues so serious as rape or murder are not ones that we condone.”

The Philippines ambassador to the United States has been summoned to the State Department to have a little chat about the incident.

On Monday, spokesperson Elizabeth Trudeau commented on the incident, saying, “We’ve seen those inappropriate comments made about Ambassador Goldberg. He’s a multi-time ambassador, one of our most senior U.S. diplomats. We have asked the Philippines charge to come into the State Department to clarify those remarks.”