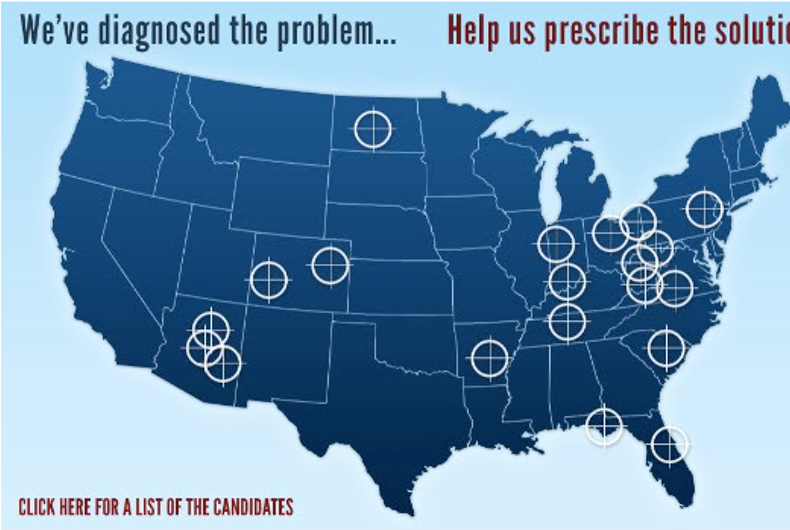 Using the crosshairs, the symbol of the rifle aiming device, Palin emphasized in her map that these Democrats were particularly vulnerable for defeat in the next election. On January 8, 2011, however, at a Safeway supermarket parking lot in a suburb of Tucson, Arizona, a man named Jared Lee Loughner took the symbol literally.

As U.S. Representative Gabrielle (Gabby) Giffords met with her constituents, Loughner shot Giffords through the head at point-blank range, and then went on to shoot 18 other people killing six, including a nine-year-old girl and a federal District Court Chief Judge. Giffords suffered severe brain damage and did not run for re-election.

Certainly, Sarah Palin does not stand alone in using violent imagery or language. Take the example of Donald Trump. Recently at a rally, after repeating his consistent lie that Hillary Clinton, if elected President, will take away people’s guns by appointing Supreme Court justices who will place severe restrictions on the ownership of firearms, he warned his audience, “If she gets to pick her judges, there’s nothing you can do, folks,” as the crowd booed.

He then added: “Although the Second Amendment people — maybe there is, I don’t know.”

Though debatable as to his actual meaning, many took his words as veiled threats of violence against Hillary Clinton and left-leaning judges.

Donald Trump might astound Americans on a routine basis, but we must draw a bright red line between political speech and suggestions of violence. Responsible, stable individuals won’t take Trump’s rhetoric to its literal end, but his words may provide a magnet for those seeking infamy….When candidates descend into coarseness and insult, our politics follow suit. When they affirm violence, we should fear that violence will follow..,.”

If this had been the only instance that Trump used such language, politicians and the media would have in all likelihood let it slide. But Trump cannot seem to help himself from spewing incendiary drivel from his guts to his mouth.

The gay games: gold medalist comes out in Rio