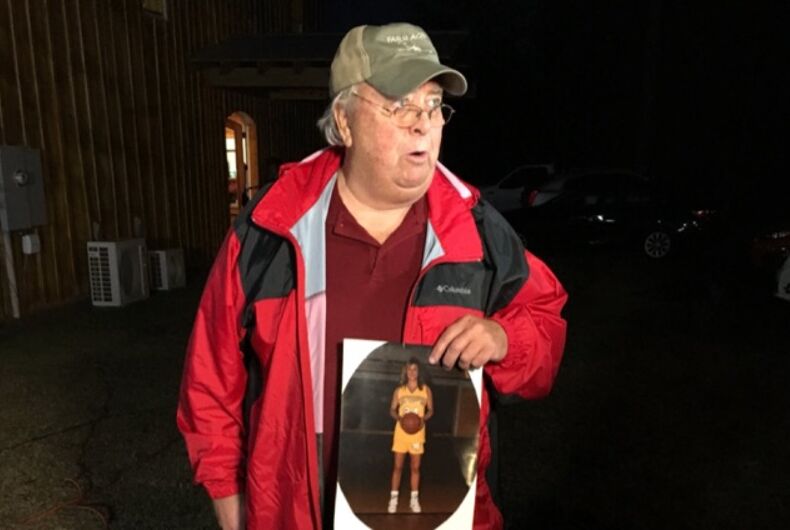 Former Alabama state representative Nathan Mathis shows media a photo of his daughter, Patti Sue, outside of a rally for senate candidate Roy Moore. Patti Sue died of suicide at 23 after struggling with her sexuality.Photo: Twitter

The peanut farmer and former state representative stood quietly with his sign outside of the venue when reporters noticed him. As they approached, they had no idea what he would say would reverberate so deeply with the nation.

Mathis said he was there to honor the memory of his daughter, Patti Sue, who died of suicide at 23.

“Judge Roy Moore called my daughter Patti Sue Mathis a pervert because she was gay. A 32 year old Roy Moore dated teenage girls ages 14 to 17. So that makes him a pervert of the worst kind,” Mathis’ sign read.

Moore is notorious for his extreme stances against LGBTQ people. He has said homosexuality should be illegal, praised Vladimir Putin for persecuting gays, and was removed from the bench as Alabama’s state supreme court chief justice for refusing to acknowledge the US Supreme Court’s ruling in favor of marriage equality.

Mattis said he considers himself religious and admits he didn’t react well when his daughter came out.

“I said bad things to my daughter myself, which I regret,” he said. “But I can’t take back what happened to my daughter. Stuff like saying my daughter was a pervert, I’m sure that bothered her.”

Mattis told the Washington Post that his response to his daughter was entirely wrong, saying he “said some things to her that still eat on me to this day.” Patti Sue died of suicide a few years later; Mattis found her body.

“May God have mercy on us all. I only know I miss my daughter Patti very much and I am grateful for having her as my daughter.”

Watch the video below, but have your Kleenex nearby. You’ll need them.

Nathan Mathis is here outside the Moore event. He tells me his daughter committed suicide and says Roy Moore called her a pervert because she was gay. “My sign says it all,” he said. pic.twitter.com/5qZnM0IyNJ

Father, who says he's a local peanut farmer in Wicksburg, outside Roy Moore rally talks about losing his gay daughter at age of 23 to suicide. "I was anti-gay myself. I said bad things to my daughter, which I regret." pic.twitter.com/J0oOU0EJI2