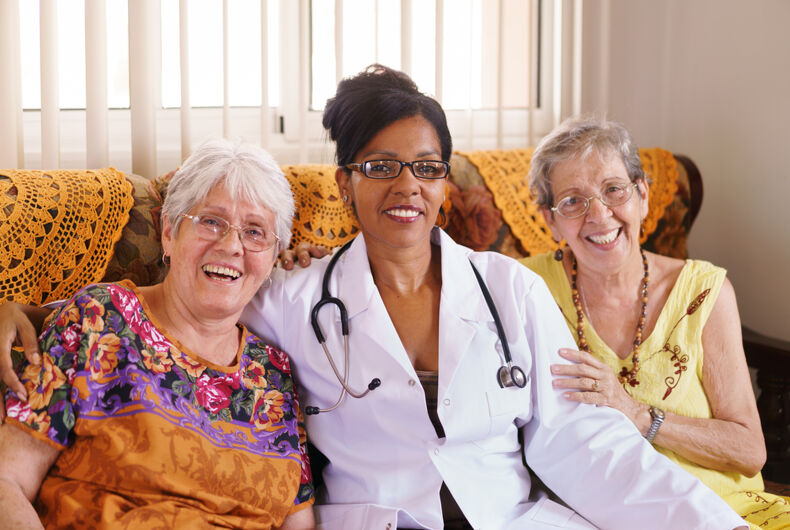 Discrimination against lesbian, gay, bisexual, transgender, gender non-conforming, queer, and/or questioning (LGBTQ) people is unacceptable in any instance but it is particularly unforgiveable when encountered in a hospice or palliative care environment. When an LGBTQ person has a serious or life-limiting illness and seeks palliative care or hospice care, they run the risk of isolation and marginalization at the precise time when they most need support. LGBTQ family members of straight patients seeking hospice care are also vulnerable.

A 2016 survey quoted in The Atlantic article “LGBT Seniors Are Being Pushed Back Into the Closet”, “found that the respondents were frequently mistreated by care-center staff, including cases of verbal and physical harassment, as well as refusal of basic services. Some respondents reported being prayed for and warned they might ‘go to hell’ for their sexual orientation or gender identity.”

Stripped of any sense of comfort, security or safety because of discrimination or poor-quality care provided by well-intentioned healthcare providers, an LGBTQ person facing a serious illness may find their situation all the more excruciating. While palliative care and hospice care are appropriate for people of all ages facing serious or life-limiting illnesses, LGBTQ older adults who’ve already experienced a lifetime of discrimination may be particularly vulnerable as they seek out care.

Most of us turn to Google when trying to determine if a business or organization is LGBTQ-friendly and inclusive, but when seeking LGBTQ-inclusive hospice and palliative care for ourselves or a loved one, it is critically important to know what to look for.

Though published as a handbook for hospice and palliative care professionals, LGBTQ-Inclusive Hospice and Palliative Care by Kimberly D. Acquaviva (Harrington Park Press) offers guidelines that translate easily into advice for those seeking palliative and end-of-life care.

Beyond sensitivity training in caring for LGBTQ patients, this first and only guidebook reiterates the broader tenet of never assuming anything about patients, family members, colleagues, or employees: Never assume the gender a person identifies as or the pronouns they want used to refer to themselves. Never make assumptions about how a person wants to be addressed, never assume that an LGBTQ person’s family either rejects or embraces, and never assume anything regarding spirituality.

In addition to fundamentals about how to conduct an inclusive “intake interview” and how to understand complex family dynamics, the book offers clear-eyed guidance on topics that may not be as obvious, but are equally critical, such as whether or not an LGBTQ healthcare professional should disclose their gender identity and/or sexual orientation in an effort to bond with the patient.

The book also reminds professionals to be being mindful of not inadvertently “outing” patients whose sex anatomy and gender identity do not match by using their preferred gender pronouns, and making sure patients’ wishes are legally protected with a healthcare power of attorney.

From the book’s chapter advising institutions and programs on how to reach LGBTQ people, it is clear that for those searching for a hospice or palliative care organization, one of the most important things to look for is a prominently- displayed, LGBTQ-inclusive, nondiscrimination statement.

The statement should, at minimum, include the phrases “gender identity” and “sexual orientation,” in addition to the other phrases that commonly appear in nondiscrimination statements, such as those pertaining to race, ethnicity, age, and religion.

If it does not appear on the homepage, typing the terms “LGBTQ,” “gay,” “lesbian,” “bisexual,” “transgender,” “discrimination,” “gender identity,” “gender expression,” or “sexual orientation” into any search boxes embedded on the organization’s homepage  should yield a link to the nondiscrimination statement.

Additionally, if one were to call the organization’s main phone number and ask about their nondiscrimination, policy the person who answers should be able to read the nondiscrimination statement directly, without transferring the call to someone else.

In order for a hospice or palliative care program to be an entity where LGBTQ individuals and their families feel safe and comfortable receiving services, it needs to be a program where LGBTQ employees also feel safe, comfortable, and valued.  Look at the organization’s non-discrimination statement to make sure it protects LGBTQ employees.

Further indications that an organization welcomes LGBTQ patients would include photos depicting patient and staff diversity that don’t appear awkward, forced, or worse, stock photos of crayon-box lineups and ads in LGBTQ newspapers and websites, an information booth at a local Pride festival, and availability of an LGBTQ bereavement group.