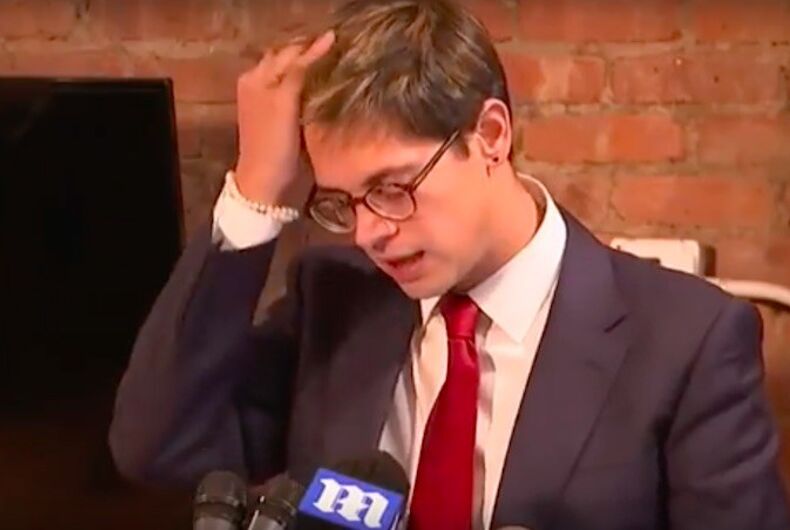 In yet another blow to his flailing career, alt-right darling Milo Yiannopoulos has lost his latest job, and this time it was one for which he wasn’t even getting paid.

Conservative website The Daily Caller upset many of its readers and its own writers when it announced it would publish Yiannopoulos, who proved too controversial even for Breitbart. He had been a senior editor at the publication until he was forced to resign after making comments defending relationships between adult men and boys.

He also just lost his billionaire investor, Robert Mercer, who said he was cutting ties. Mercer also passed on his stake in Breitbart to his daughters. That news came on the heels of BuzzFeed exposing how Yiannopoulos, Steve Bannon, and the rest of the bottom feeders at Breitbart worked with neo-Nazis and other white supremacists to mainstream bigotry.

The Daily Caller ran in to catch the leftover slop falling off Breitbart’s plate, but now it seems they have already had enough of his antics as well.

His first article, in what Yiannopoulos said was meant to be an ongoing deal, was headlined, “A Round of Applause for Kevin Spacey.”

In it, the always disingenuous Milo claims Spacey was being given a pass on his sexually predatory behavior with young men and boys because he is gay, ignoring that the LGBTQ community fell all over itself to tell him he couldn’t sit with us.

Daily Caller Editor-in-Chief Geoffrey Ingersoll told CNN it approached Yiannopoulos for a column on Spacey because they “thought him particularly fit for it.”

Opinion editor Rob Mariani is said to have then struck a deal, unbeknownst to Ingersoll, to have him provide a weekly, unpaid column. For that, Mariani has also been fired.

Mariani claimed the idea came from a “top editor” at the site, and that he ran it by Ingersoll, whom he described as being enthusiastic about the idea. Neil Patel, the site’s co-founder and publisher, released a statement claiming Yiannopoulos had not been hired.

“Sad news: The Daily Caller has caved to pressure and cancelled my weekly column after a day, claiming, falsely, they never planned to run weekly contributions from me,” Yiannopoulos said on Facebook, adding he was “disappointed, to put it mildly.”

After news of his losing his money man Mercer came through, Yiannopoulos claimed he was still succeeding.

“Another round of press declaring me dead! It’s getting sad for the media. They are so desperate to see me fail. And I keep on succeeding. Poor lambs,” he wrote.

Even he is probably having a hard time believing that these days.

What would happen if all the LGBTQ healthcare workers called in sick?