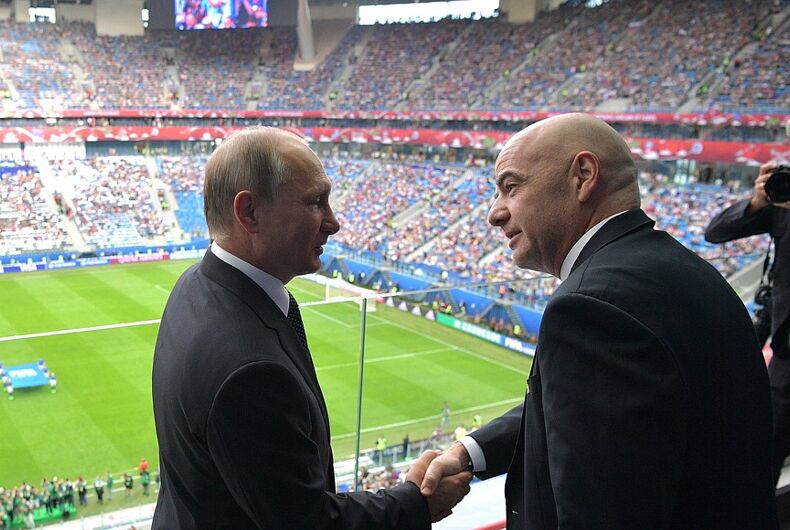 Russian President Vladimir Putin with FIFA President Gianni Infantino at the opening ceremony of the 2017 Confederations Cup.Photo: The Kremlin

FIFA’s anti-discrimination advisers have issued a warning to members of the LGBTQ community planning on attending the 2018 World Cup in Russia.

The Football Against Racism in Europe (Fare) network will produce a guide spelling out threats to be prepared for by those who wish to attend, the Associated Press reports.

“The guide will advise gay people to be cautious in any place which is not seen to be welcoming to the LGBT community,” FARE executive director Piara Powar said. “If you have gay fans walking down the street holding hands, will they face danger in doing so? That depends on which city they are in and the time of day.”

“The guide will also include some detailed explanations of for example the actual situation of the LGBT community in Russia,” Powar added. “It is not a crime to be gay but there is a law against the promotion of homosexuality to minors. Issues relating to the LGBT community are not part of the public discourse. Gay people have a place in Russia which is quite hidden and underground.”

There is also an anti-gay propaganda law in the country, often used to crackdown on LGBTQ demonstrations and events. The 2014 Winter Olympics, held in Russia, was the target of ongoing international boycotts and protests thanks to the country’s severe stance on LGBTQ rights.

The Russian government has also come under fire for not doing enough to stop the reported slaughter of  LGBTQ people happening in Chechnya, a federal subject of the country’s.