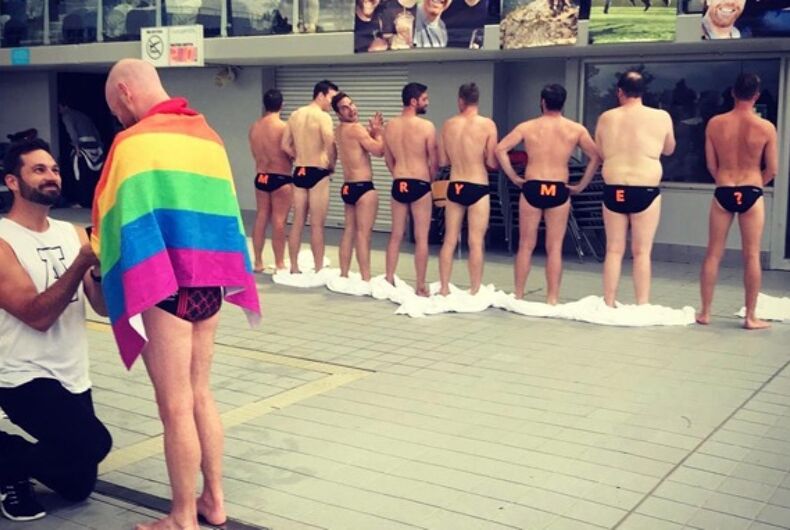 If we learned anything about the US Supreme Court’s decision to legalize same-sex marriage across the nation, it’s that gays and lesbians like to get creative with their wedding proposals.

We’ve seen a dodgeball flash mob, a dying grandfather proposing on behalf of his granddaughter, a cycling studio flash mob, and one of the most elaborate proposals ever – including confetti cannons, costume changes, and a dance troupe.

But now that marriage equality is coming to Australia, it’s our brothers and sisters down under that are getting in on the elaborate ways to pop the question. And first out of the gate is Melbourne’s Mark Keevers.

Keevers proposed to his partner, Andrew, after a Melbourne Surge water polo match. After wrapping Andrew in a rainbow flag towel when he stepped out of the pool, their song, “Hold My Hand” by Jess Glyne started playing, and some of Andrew’s teammates stripped down to show the words “Marry me?” written on the back of their trunks.

The plan was, of course, dependant on the postal survey results announced earlier this week. Australians voted overwhelmingly to legalize same-sex marriages.

“The Yes result is completely validating. To see that people in my own country see me as legitimate and the same,” Keevers told the Star Observer. “The proposal was timed accordingly – I thought, I’m going to get a Yes win in the postal survey and make sure he knows about it the next day.”

He got a yes from Andrew too.

As marriage equality draws nearer, we’re so excited to see one of our own be amongst the latest members of the LGBTIQ community to get engaged! Congratulations Rusty & Mark! We’re honoured to be part of your special moment following our Water Polo Victoria game this evening at MSAC – Melbourne Sports and Aquatic Centre. #equality #melbournesurge #yes