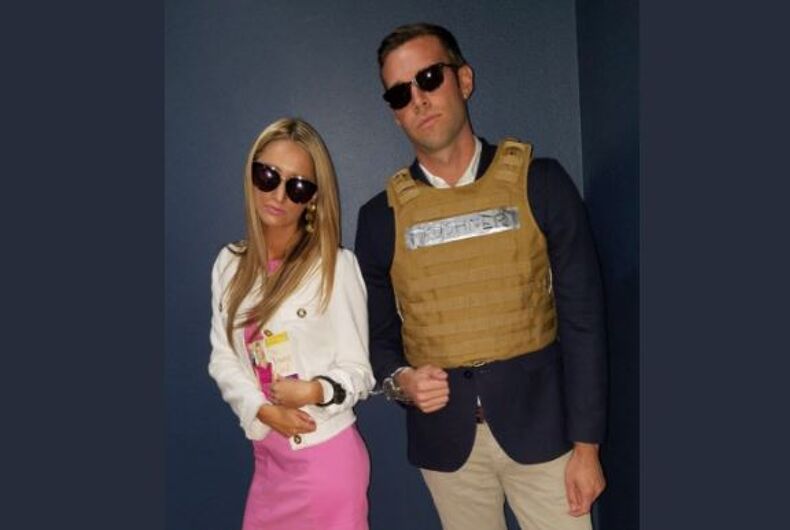 Jon Favreau and his wife, Emily, dressed as Jared and Ivanka Trump for Halloween.Photo: Twitter/@jonfavs

Halloween hasn’t even happened yet, but we already have a winner for Best Costume.

Former Obama speechwriter, and Crooked Media co-founder and Pod Save America podcaster, Jon Favreau tweeted out a photo of himself dressed as Jared Kushner, handcuffed to his wife, Emily, who is dressed as Ivanka Trump.

Favreau is dressed in a flack jacket over a blazer, mimicking Kushner’s look during a trip to Iraq. “Ivanka” is seen holding a copy of “her” book, The Trump Card.

“Early case of the Mondays?” Favreau wrote, alluding to the report of charges coming against someone in the Trump campaign.

Early case of the Mondays? pic.twitter.com/ZcCbHhFxym

As we now know, it was not Kushner, but Paul Manafort and Rick Gates who have been forced to face the music, but it’s safe to say that everyone around Trump is feeling uneasy these days.

Favreau’s wife also tweeted out the photo, with a quote from Ivanka Trump, taken from her interview with Gayle King, as to whether she’s complicit in the White House’s rolling blunder revue.

“If being complicit is wanting to be a force for good and to make a positive impact, then I’m complicit.” https://t.co/DiDWILCzzU

Someone tried to bomb a gay nightclub in Puerto Rico