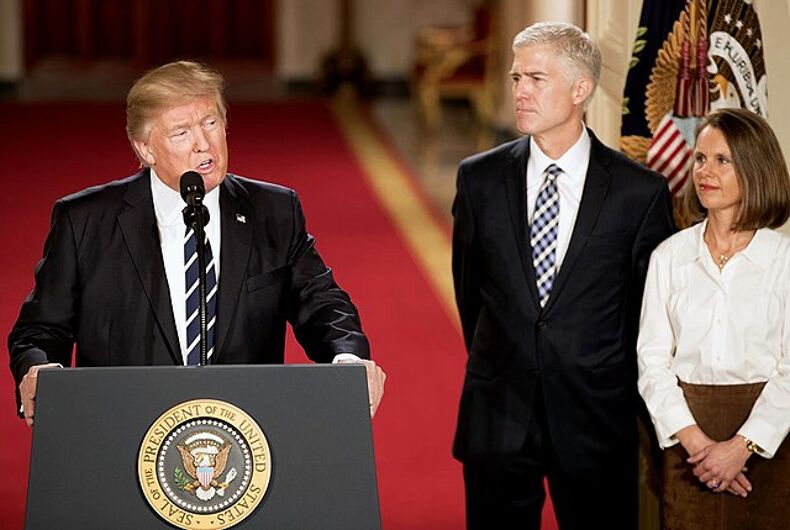 President Donald Trump is reportedly convinced that he will get to nominate three more justices during his first term.

Trump appointed Neil Gorsuch to fill the seat vacated by the late Antonin Scalia, and rumors of Justice Anthony Kennedy’s upcoming retirement have spiraled around Washington for months.

Sources speaking with Axios said Trump think he’ll replace two other justices because he expects them to die before his term ends.

One source recounted a conversation that is said to have gone like this:

“Ginsburg,” Trump replied. “What does she weigh? 60 pounds?”

“Who’s the fourth?” the source asked.

“Sotomayor,” Trump said, referring to the relatively recently-appointed Obama justice, whose name is rarely, if ever, mentioned in speculation about the next justice to be replaced. “Her health,” Trump explained. “No good. Diabetes.”

Ginsburg is 84 and is a cancer survivor twice over. The exercise regimen she adopted after her first cancer scare is said to be intense and grueling.

Sotomayor has spoken publicly about her type-1 diabetes that she has successfully managed since childhood.

Trump, who was guarded around his health records during the campaign, it should be noted, is nearly ten years her senior. He also detests exercise, says he only gets three to four hours of sleep a night, and has made his love of fast food well known.

Pope Francis isn’t a progressive hero, he’s the leader of a gang of bullies