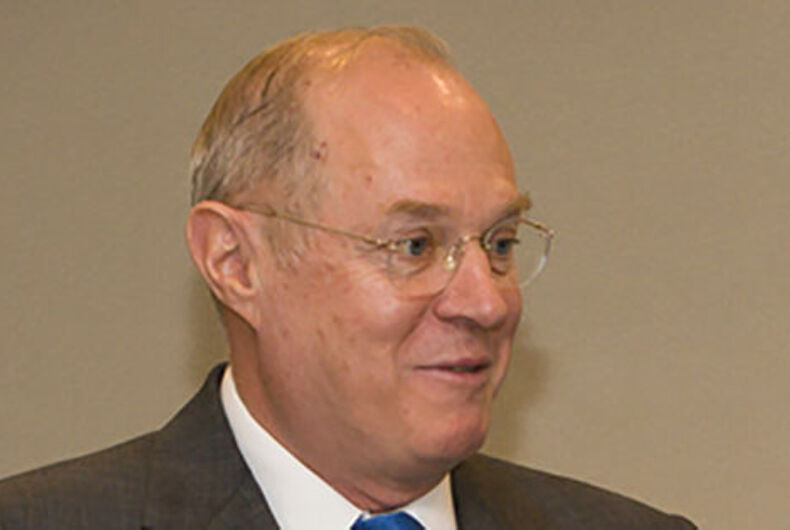 It would be the nightmare dreaded by liberals, progressives and Democrats who just fought tooth and nail to block the confirmation of Supreme Court Justice Neil Gorsuch: the feared imminent retirement of Justice Anthony Kennedy.

Appointed by President Reagan after two of his nominees failed to win confirmation, Kennedy is one of three justices over the age of 78 and the pivotal centrist middle man who leans right on issues like campaign finance and voting rights, and to the left on gay rights and other social issues.

But as Bloomberg reports if aides and others predicting he will announce his retirement at the end of this term are right, Trump could finally create the five-member majority that legal conservatives have dreamed about — one that might even overturn long-standing precedents like Roe v. Wade and Obergefell — the ruling that legalized marriage equality.

“Kennedy leaving and being replaced by a Trump pick will almost certainly move the court to the right and perhaps make the court the most conservative court we have had since the 1930s,” Neal Devins, a William & Mary Law School professor and author, told Bloomberg.

Although Kennedy has not made any formal announcement, the website noted his next law clerk reunion will take place during the last weekend of June, perhaps presenting an opportunity to tell his peers a lot more than “what’s new.”

The speculation is rampant because Kennedy reunions usually take place every five years, and this one comes four years after the last event. Plus, it’s timed for the end of June, just as the current high court term concludes, rather than in mid-June as previous reunions have.

Supreme Court spokeswoman Kathy Arberg said in an email to Bloomberg that the late-June weekend was chosen “because it works best with the Justice’s schedule.”

Given the Republicans’ hold a 52-48 advantage in the Senate, the GOP could confirm the next Trump nominee without a single vote of Democratic support. And Kennedy’s position in the court’s center would guarantee a cagematch fight over confirmation that would make the struggle against Gorsuch look like a college sit-in.

“The campaign against a judicially conservative nominee to replace Justice Kennedy would be ferocious,” Rick Garnett, a constitutional law professor at the University of Notre Dame’s law school, told Bloomberg. “Senators who are up for reelection in 2018 will almost certainly be unable to avoid well-funded and tireless efforts to elevate the political salience of their votes on the nominee.”