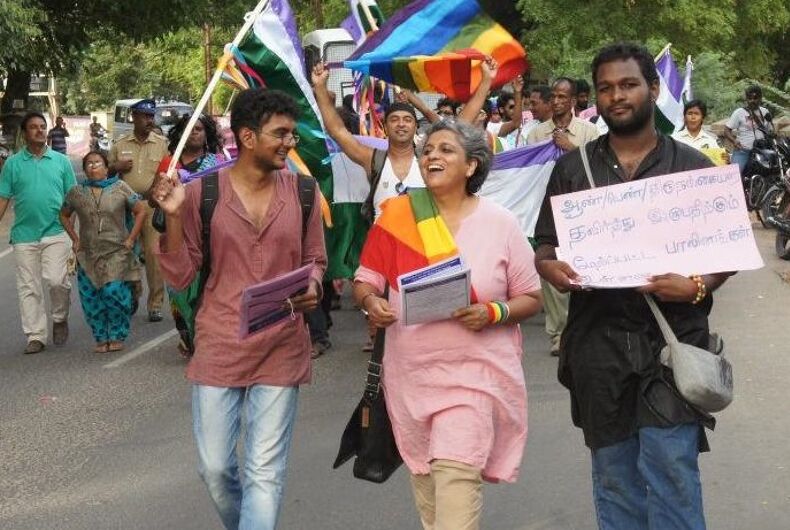 A university in India will no longer charge tuition for transgender students.

Manonmaniam Sundaranar University (MSU) was founded in 1990 in rural Tamil Nadu in southern India and has around 2400 students.

K. Baskar, vice-chancellor of the university, said that the measure is meant to help the economic advancement of transgender people. “After getting neglected by the society and even by their parents, the transgenders are forced to beg on the streets. If we can create a favorable condition for acquiring better educational qualifications, it will enable them to occupy enviable positions in government or private institutions, and hence, the MSU has taken an initiative in this direction.”

Recognition of transgender people as an oppressed class has been developing quickly in India in recent years. In 2005, passport forms in India were changed to allow for three gender options – male, female, and eunuch – and in 2014 the nation’s high court ruled that the government had to make special reservations in job quotas and education for transgender people.

“Transgenders are also citizens of India. It is the right of every human being to choose their gender. The spirit of the Constitution is to provide equal opportunity to every citizens to grow and attain their potential, irrespective of caste, religion or gender,” the 2014 ruling read.

In 2008, the state of Tamil Nadu created the Transgender Welfare Board that, among other things, issued food ration cards for transgender people. The state also offers free sex reassignment surgery in government hospitals.

Baskar said that the university has already seen how education can help transgender people, “A transgender from Salem has become the first Sub-Inspector of Police in Tamil Nadu to prove that providing right opportunity is important for them to come up in life. We, by giving the fee waiver, have announced in an unequivocal manner that MSU is for the upliftment of the third gender. We should ensure a respectable life for them.”

Is Supreme Court Justice Anthony Kennedy about to retire?