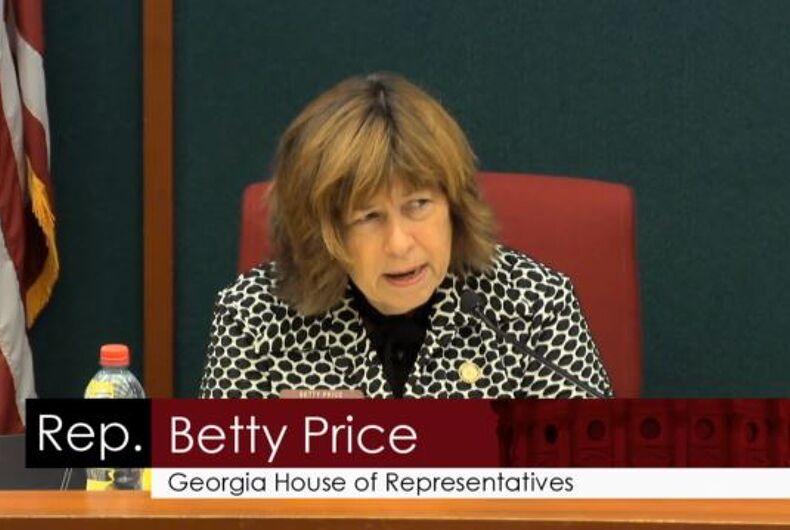 State Rep. Betty Price asks if about the legality of quarantining people living with HIV during a House committee hearing, on Oct. 17, 2017.Photo: Screenshot

Betty Price, who is a former anesthesiologist, made the comments at a House study committee meeting on Tuesday, addressing the barriers to adequate healthcare that HIV-positive people face, Project Q Atlanta reports.

“My thinking sometimes goes in strange directions, but before you proceed if you wouldn’t mind commenting on the surveillance of partners, tracking of contacts, that sort of thing. What are we legally able to do?” Price asked Dr. Pascale Wortley, director of the Georgia Department of Public Health’s HIV epidemiology section.

“And I don’t want to say the quarantine word, but I guess I just said it. Is there an ability, since I would guess that public dollars are expended heavily in prophylaxis and treatment of this condition. So we have a public interest in curtailing the spread. What would you advise or are there any methods legally that we could do that would curtail the spread,” she continued.

But she wasn’t done yet.

“It’s almost frightening the number of people who are living that are…carriers with the potential to spread,” she said. “Whereas in the past, they died more readily, and then at that point, they’re not posing a risk. So we’ve got a huge population posing a risk if they’re not in treatment.”

Wortley did not directly answer Price’s question, STAT reports, instead calling for the expansion of health services for all Georgians living with the disease.

The publication also notes that, according to the CDC, Georgia had the highest rate of new HIV diagnoses among all states, and Wortley’s presentation called attention to the fact that gay black men in Atlanta are more at risk than any other group by far.

The CDC reports that African Americans are the racial group most affected by HIV in the United States, and that gay and bi men account for the majority of new HIV diagnoses among African Americans.

“When we come into spaces like this and we hear questions around how legally far can we go to isolate people or even quarantine people, then it just lets you know that we have a real uphill battle,” said Dazon Dixon Diallo of the Georgia Coalition to End HIV Criminalization.

She added that she was “disappointed and dismayed” that the hearing didn’t include “a single presentation or a voice from the community, from people living with HIV, or from folks who have been actually victimized by these HIV criminalization statutes that we have in the state of Georgia.”

The hearing also included discussion of the state’s HIV criminalization laws that not only make non-disclosure of a positive status before engaging in sexual contact a felony, but also criminalizes actions like spitting at police officers, which can bring a 20 year prison sentence.

Advocates are calling on Georgia to update its laws to reflect the current science, showing you cannot pass on HIV through saliva, or through sexual contact when a person is virally suppressed through taking antiretroviral drugs.

HIV criminalization laws, HIV rights activists note, can lead to decreases in the numbers of those getting tested, add to the stigma around the disease, and tend to lead to harsher punishments for people of color in particular.

California recently lowered the penalty for willfully exposing someone to HIV, moving it from a felony to a misdemeanor.

You can watch the full committee meeting where Price makes the comments in the video below, starting around the 1 hour, 2 minute mark.

This is the average face of the United States Congress

6 up & coming queer Instagrammers you need to follow right now