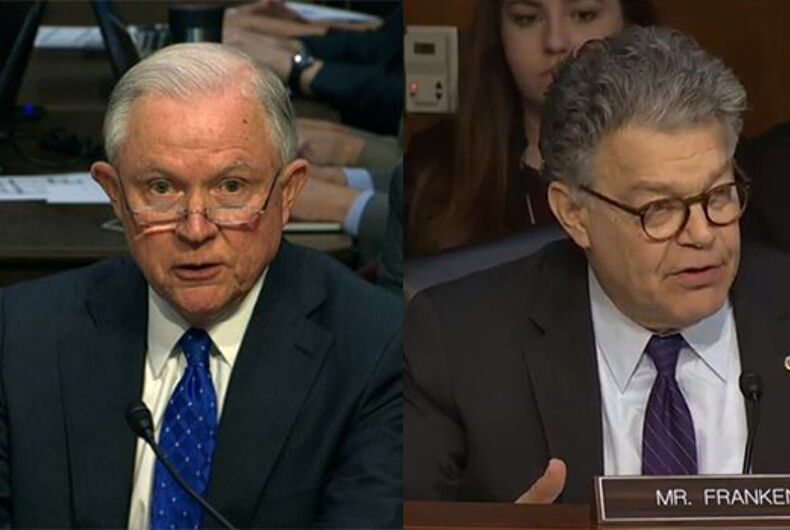 Sen. Al Franken took Attorney General Jeff Sessions to task for the Trump administration’s horrible record on LGBTQ rights, and told him he was the worst offender of the lot.

Franken first grilled Sessions on the connections between the administration and Russia, including calling him out for saying he had no connection with the Russians. It has been revealed that Sessions spoke with Russian diplomat Sergey Kislyak last year.

After dragging Sessions for his blatant dishonesty, Franken turned his attention to LGBTQ issues.

“On Monday it was reported that you personally directed DOJ (the Department of Justice) to send a federal prosecutor to assist in the hate crimes prosecution of a man charged with murdering a transgender teenager in Iowa,” the senator began.

“And I will be the first to say that DOJ should be lauded for doing so,” he added.

It should be noted that many LGBTQ advocates question Sessions’ motivations, arguing that he is simply in favor of long prison sentences for violent offenders, and isn’t so much concerned about the transgender victims.

Some have suggested it is nothing more than a publicity stunt, to detract from the administration’s otherwise poor record on LGBTQ issues.

“But your decision to prosecute this hate crime incident doesn’t tell the whole story,” Franken continued. “Since your confirmation, DOJ has wasted no time in systematically undermining attempts to safeguard LGBT people from discrimination by revoking policies designed to protect them, and declining to protect their rights in court.”

“For example: DOJ revoked guidelines designed to make schools safe and welcoming places for LGBT students; DOJ argued that federal civil rights laws don’t protect lesbian, gay, or bisexual workers from job discrimination; DOJ asserted that transgender people don’t deserve federal protections from discrimination at work; DOJ lawyers are defending the president’s ban on transgender troops in court; and DOJ issued a sweeping new order directing the government to accommodate people with anti-LGBT views, which could potentially allow them to sidestep laws banning discrimination at work, in school, and in public accommodations, all in the name of religious liberty,” he said.

Then he moved in for the final blow.

“General Sessions, there is an argument to be made that no single Trump administration official has done more to hurt LGBT people than you,” he said.

He added that Sessions said he would stand up for the rights of LGBTQ people, but that the record show he has failed.

He charged that, under Sessions’ leadership, the DOJ has “demonstrated unrelenting hostility” to the LGBTQ community.

Sessions rejected the phrase “unrelenting hostility” against the community.

He argued that civil rights law protecting sex is not meant to include sexual orientation or gender identity, and said he felt that employment issues should be left up to the states.

Watch the exchange below.

This is the average face of the United States Congress