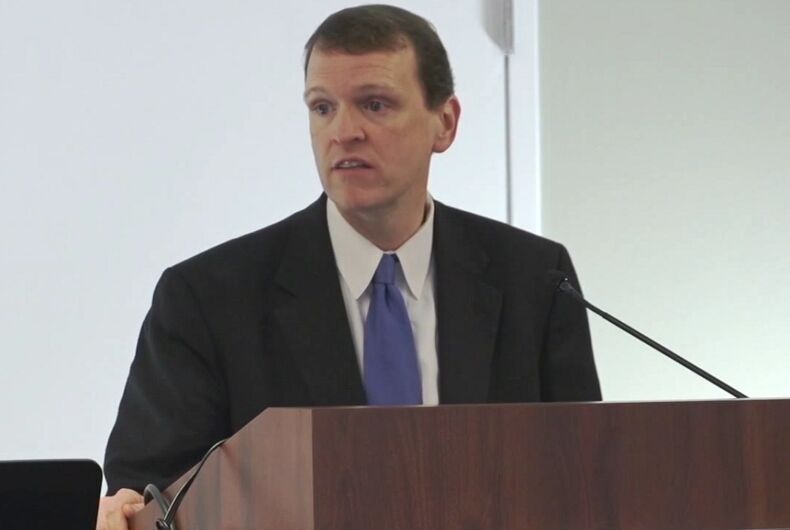 Donald Trump made lots of promises to be the LGBT community’s best friend while he was campaigning, but with Vice President Mike Pence actually running the administration while Trump tweets, golfs, and poses for photos, far right religious conservatives have dominated his appointments to courts, his cabinet, and staff.

Jeff Mateer, Trump’s pick for a federal judgeship in Texas, is the most vociferously anti-LGBT yet and CNN is highlighting some of his most offensive and dangerous comments to date.

Mateer is a former high level staffer for the religious right organization Liberty Institute, now known as First Liberty Institute. While working there, he advocated against nondiscrimination laws that included LGBT people, lamented the increase in states banning the dangerous practice of “conversion therapy,” and described transgender children as “part of Satan’s plan.”

“And the school said, ‘Well, she’s not using the girl’s restroom.’ And so she has now sued to have a right to go in. Now, I submit to you, a parent of three children who are now young adults, a first grader really knows what their sexual identity? I mean it just really shows you how Satan’s plan is working and the destruction that’s going on.”

In a later portion of the speech about the Supreme Court decision legalizing same-sex marriage, Mateer continued with his shocking remarks. “I submit to you that there’ll be no line there,” he said. “And actually in the arguments Chief Justice Roberts, who’s in the center there said, I mean, what is the limiting? Why couldn’t four 4 people wanna get married? Why not one man and three women? Or three women and one man?” he said.

“I mean, it’s disgusting. I’ve learned words I didn’t know. I mean, other than…my assistants here, have you ever heard the word ‘throuple’?’Throuple’ so that’s three people coming together of different sexes, maybe mixed sexes. Them coming together. There are people who marry themselves. Somebody wanted to marry a tree. People marrying their pets. It’s just like — you know, you read the New Testament and you read about all the things and you think, ‘Oh, that’s not going on in our community.’ Oh yes it is. We’re back to that time where debauchery rules.”

The same year, Mateer appeared on a radio show hosted by Kevin Swanson, a pastor infamous for advocating that LGBT people be put to death. During the appearance, Mateer lamented that states and communities were outlawing so-called ex-gay therapy. The quack theory says gay people can turn straight via various means like electroshock therapy, intense naked group therapy with other men, beating pillows, calling your mother names, reading the Bible, and other nonsense. In the end, all it does is increase suicide rates.

“Biblical counselors and therapists, we’ve seen cases in New Jersey and in California where folks have gotten in trouble because they gave biblical counseling and, you know, the issue is always, it’s same sex,” Mateer says in the interview. “And if you’re giving conversion therapy, that’s been outlawed in at least two states and then in some local areas. So they’re invading that area.”

Mateer declined to comment for the CNN article, because bullies and bigots normally wither under the glare of sunlight. These types love to play to their audience, but deep inside they know their prejudice isn’t accepted in polite society and they’re ashamed of themselves.