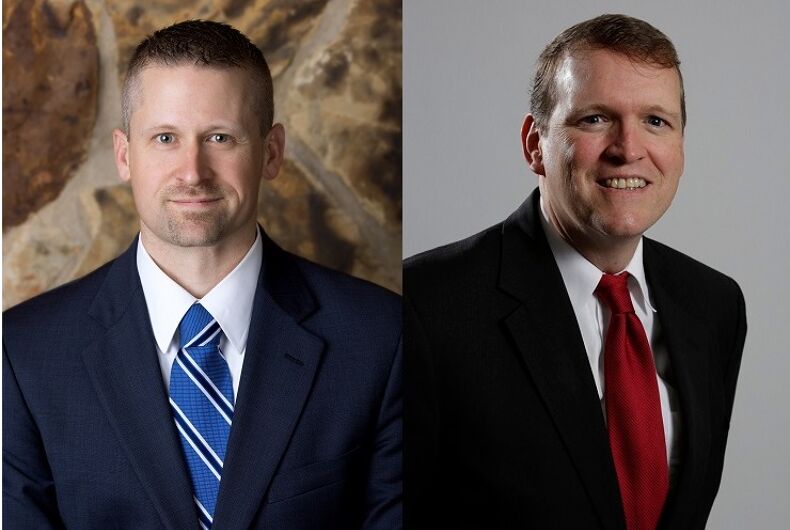 On Friday, Donald Trump released a batch of 16 nominees for the federal bench, including two lawyers associated with a Texas conservative Christian organization.

Founded by Kelly Shackelford, an activist who pushed for Texas to ban marriage equality in 2005, FLI is a legal organization that generally represents conservative Christians and attacks the separation of church and state.

FLI has been involved in cases opposing LGBTQ rights. In 2014, they represented a newspaper editor who was fired for writing a blog post where he advocated fighting “the LGBTQXYZ crowd and the Gaystapo,” who he accused of trying “to make their sinful nature right with God.” He claimed that he was fired for his religious beliefs (I too am unfamiliar with the Bible passage that compares gay people to Nazis), and the case ended in an undisclosed settlement.

Now FLI is representing Aaron and Melissa Klein, the owners of Sweet Cakes, an Oregon bakery that was fined $135,000 for refusing to serve a lesbian couple.

Mateer, who has no judicial experience, was general counsel for FLI before being nominated as first assistant attorney general in Texas. He has said that he doesn’t believe that the Constitution guarantees a separation of church and state.

I’ll hold up my hundred-dollar bill and say, ‘for the first student who can cite me the provision in the Constitution that guarantees the separation of church and state verbatim, I’ll give this hundred dollar bill…. The protections of the First Amendment protect us from government, not to cause government to persecute us because of our religious beliefs.

Kacsmaryk, who also has no judicial experience, is listed on FLI’s website as their deputy general counsel. In a 2015 opinion piece posted on Life Site News, Kacsmaryk decried marriage equality and LGBTQ anti-discrimination legislation. “Five justices of the Supreme Court found an unwritten ‘fundamental right’ to same-sex marriage hiding in the due process clause of the Fourteenth Amendment — a secret knowledge so cleverly concealed in the nineteenth-century amendment that it took almost 150 years to find,” he wrote.

In a statement, Equality Texas said, “By nominating associates of this hate group, the president is using his office in an attempt to ensure policies will be created and spearheaded to advance anti-LGBTQ discrimination in employment, housing and places of business all under the guise of protecting religious liberties.”

Mateer has a troubled past when it comes to separating his political advocacy and his professional work. He was working for FLI when it represented Tom Brown Ministries, which is described as an anti-gay hate group by the Southern Poverty Law Center. After leaving FLI to work for the Texas Attorney General, the state attorney general’s office wrote a friend-of-court brief for Tom Brown Ministries in a local lawsuit.

Kacsmaryk and Mateer will have to be approved by the Senate before becoming judges, and, if confirmed, will get lifetime appointments that they can use to advance their beliefs about the Constitution.