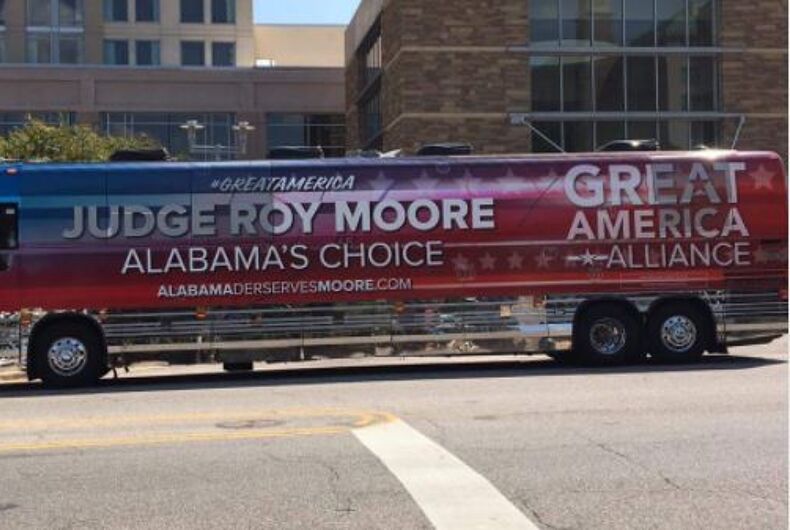 Moore, who is one of the most virulently anti-LGBTQ politicians on the scene today, is challenging Senator Luther Strange, who was appointed to the seat after Jeff Sessions became Attorney General, in the GOP primary. If he can win there, he will face Democrat Doug Jones.

It’s a tight race all the way around, with everyone fighting for whatever edge they can get, and Jones’s campaign, or possibly a supporter, just took advantage of a gift on a silver platter in the form of a typo on Moore’s bus.

Whoever comes up with a "Spellcheck For Buses" app is going to make a lot of money. Check the website toward the bottom… pic.twitter.com/OvstBOLUiO

And what happens if you go to AlabamaDerservesMoore.com? As you can see yourself by clicking that link, it redirects to Jones’s campaign site, DougJonesForSenate.com.

It seems Roy Moore’s team deserves, or at least is in desperate need of, better proofreading.

According to Moore’s campaign, the bus and the wrap with the typo is operated by the candidate’s Super PAC, Great American Alliance. The typo was reportedly later covered up with a decal.

While Trump is stumping for Strange, Moore is getting support from former deputy assistant to Trump, Sebastian Gorka, as well as from Sarah Palin.

Watch: Ellen sat down with a transgender military couple to talk about Trump’s ban

Thank you, Sen. McCain, for being a maverick in the battle to save healthcare