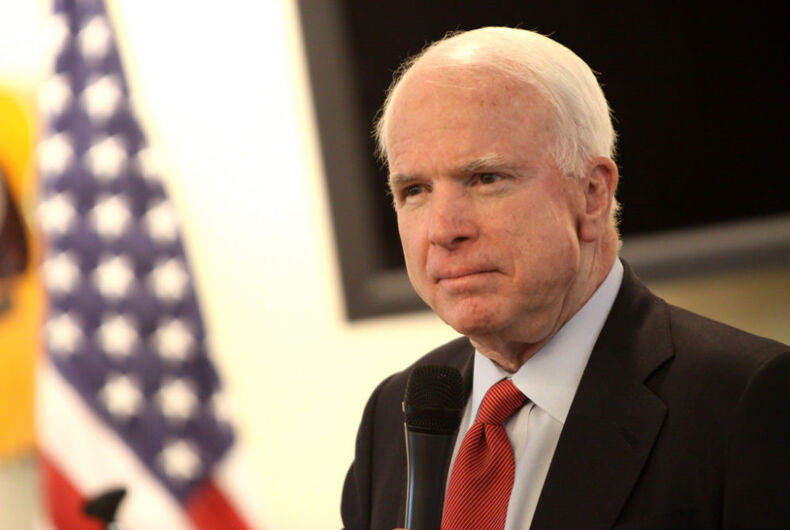 Sen. John McCain has made good on his maverick nickname.Photo: Gage Skidmore via Flickr

Sen. John McCain has long presented himself as a maverick. Today he proved it.

At times, there has been reason to question if that title fit, but his stand against Republican efforts to rush through a healthcare bill that would strip benefits from millions shows it is plenty apt.

I cannot in good conscience vote for Graham-Cassidy. A bill impacting so many lives deserves a bipartisan approach. https://t.co/2sDjhw6Era pic.twitter.com/30OWezQpLg

“I cannot in good conscience vote for the Graham-Cassidy proposal,” the Arizona Republican said in a statement. “I believe we could do better working together, Republicans and Democrats, and have not yet really tried. Nor could I support it without knowing how much it will cost, how it will (affect) insurance premiums, and how many people will be helped or hurt by it. Without a full CBO score, which won’t be available by the end of the month, we won’t have reliable answers to any of those questions.”

It would have been easy for him to have simply shrugged and said, “Good enough” after years of promising to repeal and replace Obamacare, as many of his colleagues have done, believing that anything is better than nothing at this point.

But McCain stood firm, as he did when he voted against the Republican’s previous healthcare bill in July, staying true to his word that he would not support a bill that did not go through the “regular order” of Senate hearings, an amendment process, and a floor debate.

That is what being a true representative of the people looks like, and he should be applauded.

“I take no pleasure in announcing my opposition. Far from it,” McCain said. “The bill’s authors are my dear friends, and I think the world of them. I know they are acting consistently with their beliefs and sense of what is best for the country. So am I.”

McCain, who is battling brain cancer, showed that he will put country over party, and his fellow Republican senators should take note.

RETWEET TO TELL THE GOP TO STAND BEHIND SENATOR JOHN MCCAIN

He had the bravery to stand up for us.

It's time for you to do the same. pic.twitter.com/xEAdPZwKKa

Thank you for your sacrifice (again).
You ARE the hero of America.

But it can’t be taken for granted that the Graham-Cassidy bill will fail just because Sen. McCain is out.

It is unlikely to reach the needed 50 votes now, especially with Sen. Susan Collins saying she is “leaning against the bill.” Republicans would need both she and Alaska Sen. Lisa Murkowski, as well as Sen. Rand Paul, who has said he won’t back the measure.

That said, this is politics, and it’s not over until it’s over. Your calls are still needed to stop them from destroying Obamacare by the September 30 deadline.

Excellent news. But let's keep the pressure on, friends. Keep calling your Senators, urge them to vote No on #GrahamCassidy.

McCain comes out against #GrahamCasiddy – we are close to defeating this zombie for good! https://t.co/UXakgxjyRR pic.twitter.com/Mha7UDcbjj