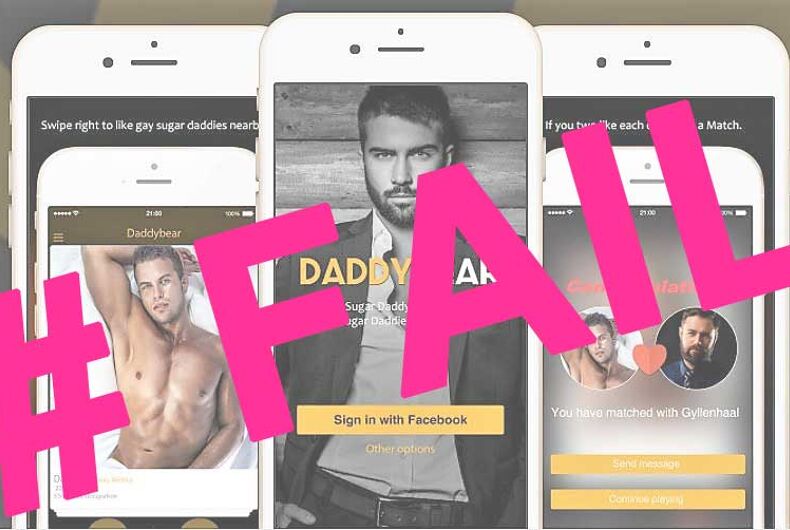 At some point you have to feel a little sorry for the bumbling app “DaddyBear.” It’s the gay cruising app that promises to hook up “gay sugar daddies” with younger “bears” – but only if you’re HIV negative. After an avalanche of criticism and mocking stories about their promise of “healthy HIV negative” app users, the CEO has issued a public mea culpa. It did not go well.

The CEO, who goes only by the name of Justin and who we shall herewith refer to as “Just Justin,” sent me a private email apologizing for his ignorance of pretty much everything to do with HIV and gay men. Just Justin expressed his gratitude to me for my earlier piece denouncing their policy, and goes on to say that he has now realized that “there are many HIV positive guys out there.”

This keen observation was followed by another, namely that he also now realizes many HIV positive guys are on treatment that can help them become undetectable and “highly prevent HIV transmission.” Score one for the U=U effort, even if “zero transmissions in every research study” would be more accurate.

Just Justin then linked me to their public apology posted on PR Newswire, the public relations tool for people too busy exploiting gay men to build their own media list. That’s when things went from bad to much worse.

After spending a paragraph apologizing for their “foolish attempt,” Just Justin (nope, he doesn’t use a last name in press releases, either) attempts to explain why in the world he would have ever thought his HIV negative-only policy was a good idea. Here is that paragraph:.

As for this improper idea, it came for a reason. Justin is a gay sugar daddy who is loyal and prefers long term relationships. His last partner left him for no reason and he has had a really hard time to accept that breakup. Recently, Justin heard that his partner was infected with HIV during their relationship when he was having unprotected sex with another guy who was with the malicious intent to transmit the disease. After diagnosed, his partner felt ashamed and desperate, so he chose to put an end to the relationship. Although Justin couldn’t forgive his betrayal, he was so mad at the guy who infected his partner. That anger lead him to wrongly misjudge the present situation and make an immature decision to build a gay dating app that doesn’t allow gay men living with HIV.

Holy Kaletra, people. So much to unpack.

Just Justin had an unfaithful partner who was infected with “malicious intent” by some guy with whom the ex-partner was having unprotected sex. This angered Just Justin so much he built a dating app that excludes positive guys. Which is a perfectly reasonable reaction, I’m sure.

Just Justin has now leapt from simply excluding HIV positive men to projecting “malicious intent” onto the positive person for infecting someone else. He has reduced a person with HIV to a vector of disease intent on harming others.

Just Justin does not know the motives of the person who infected his former partner. He wasn’t there. But if epidemiology and human nature are to be believed, those two people were behaving in precisely the same way as most of the other 50,000 people who are infected in this country each and every year. They were careless, they were lonely, they didn’t know their status, they were drunk, they said yes when they should have said no. In short, they behaved humanly, and the virus took advantage in the same way it has for the last forty years.

Just Justin then mentions me, and for perhaps the first time in my blogging career I shrieked in horror at the sight of seeing myself name checked.

Justin wants to firstly express his gratitude towards Mark S. King, a writer who pointed out our mistake directly in his article, which made us to know why it is not right to promote a gay app that excludes HIV-positive men from joining. Justin would also like to apologize and wish Mark could forgive him for not figuring out the reality before making a wrong statement.

Oh God, leave me out of this. If I have educated you, Just Justin, I did a horrendous job of it. And quit begging for forgiveness. It is very un-sugar daddy of you.

Yes, you do detect broken English in the press release. Did I mention that the phone number Just Justin uses for his press release has a Chinese country code? Not that there’s anything wrong with China. Well, scratch that. Not that there’s anything wrong with Chinese gay sugar daddies. But they might not have access to the most recent and accurate information. Or maybe HIV stigma know no geographic bounds.

Just Justin wraps up his  press release by thanking everyone “for making him realize that HIV is not so horrible and he highly suggests that all men should face up to it and receive treatment.”

I guess there are gradations of horrible. There’s HIV positive horrible, and there’s Mexico earthquake horrible. Somewhere in between is the horrible that drives you to point fingers at the innocent, make dating apps out of spite, and then embarrass yourself with a public apology that reveals new depths of ignorance and misdirected judgment.

Something tells me gay men are not flocking to this sad addition in the gay hookup canon. That may be a testament to the truly awful concept of DaddyBear as much as to their HIV ignorance.

The real threat to people with HIV lives on, however, in the crushing social stigma we experience each day, not the least of which exists behind the cloak of online cruising profiles.

Mark S. King is a hot daddy who is HIV+ and blogs at My Fabulous Disease.

Thank you, Sen. McCain, for being a maverick in the battle to save healthcare