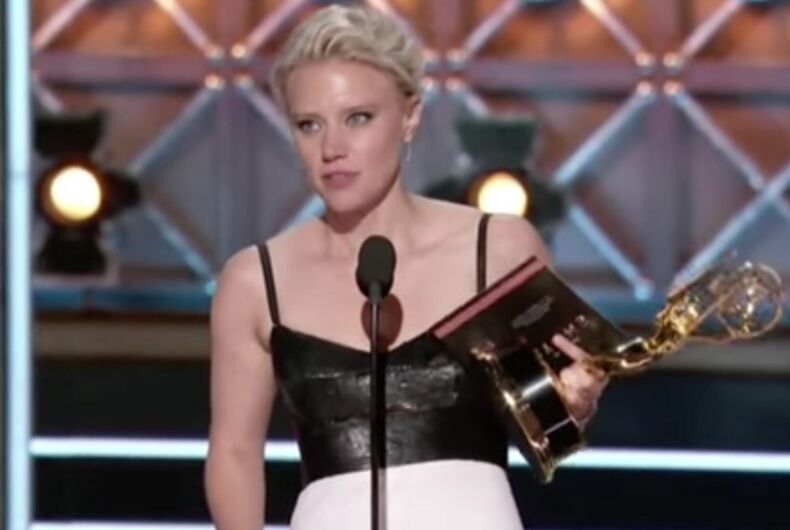 Waithe won the Emmy for Outstanding Writing for a Comedy Series, along with co-writer Aziz Ansari, for the episode “Thanksgiving” of Netflix’s Master of None. The episode followed Waithe’s character Denise through a decade of Thanksgiving dinners, where each year showed her evolving relationship with her mother, strained because she is gay and her mother is homophobic.

Waithe is the first African American woman to win the Emmy for best writing in a comedy. In her speech, she thanked “my LGBTQIA family” and said she could see our “super powers.”

Saturday Night Live‘s first openly lesbian actress Kate McKinnon won Supporting Actress in a Comedy Series for the second year in a row. McKinnon is perhaps best known for her impression of Hillary Clinton on SNL, a recurring role where she set aside many of the tired Hillary impersonation tropes and instead channeled what Hillary is really feeling, what the polished politician couldn’t show in public.

The episode “San Junipero” of the British series Black Mirror won two awards: Outstanding TV Movie and Outstanding Writing for a Limited Series, Movie, or Dramatic Special. The sci-fi episode is about a shy woman visiting the resort town and how she falls in love with a regular visitor, who is also a woman. The episode – which The Guardian called “surprising and ultimately poignant” – also won the GLAAD Media Award for Outstanding Individual Episode this year.

Alexis Bledel won the award for Outstanding Guest Actress in a Drama Series at the Creative Arts Emmy Awards last week for her portrayal of Ofglen in The Handmaid’s Tale, a woman who is horrifically punished for loving another woman.

During the award ceremony last night, host Stephen Colbert interviewed the Emmy statue herself, played by RuPaul, and asked her about her relationships with Oscar and Tony.