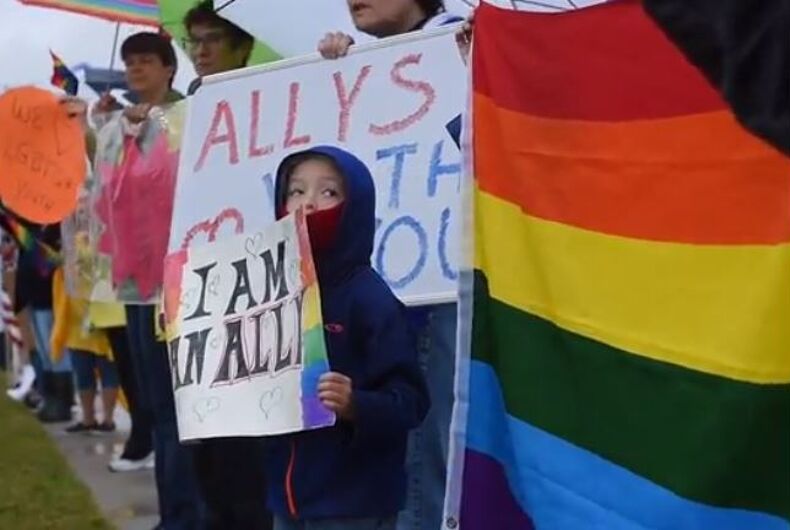 LGBTQ community members and allies rallied Tuesday morning outside of a high school in Kansas where members of the Gay-Straight alliance were bullied during a homecoming parade.

Last week, students at Olathe Northwest High School reported being subjected to humiliating slurs hurled at them along the parade route, including a chant of “Make America Straight Again.” Many of the students ended up reduced to tears by the end of the event.

Those out front of the school with pride flags, signs of support, and smiling faces wanted those students to know that they weren’t alone.

“I’m a superhero,” said Izzy, a 9 year-old transgender child who came to show support wearing a trans pride flag as a cape. “I came to stand up for other people like me, and my superpower is fighting off the haters.”

Approximately 150 people showed up in spite of the rain, The Kansas City Star reports.

“This is my neighborhood. I know these kids. I was these kids in 1985 when I came out,” said Missy Koonce. “I know what it’s like to be bullied and beaten. It’s important for kids to know they have support.”

As it happens, this is GLSEN’s ally week, a fact not lost on those rallying in support of the students, many of whom stopped and thanked those demonstrating on their behalf.

Olathe Northwest students came out to wave at those wave signs of support. pic.twitter.com/PXYiwLom6W