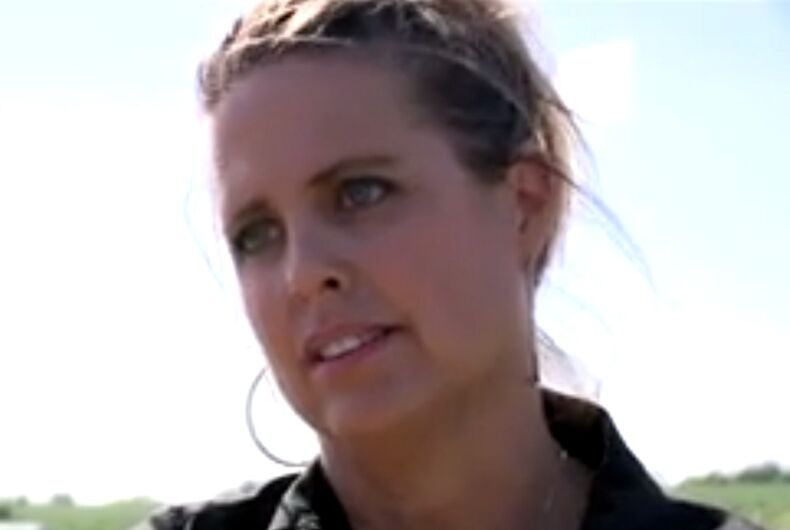 Missy, a parent of one of the students who were attacked, said they had a lot of "guts" to go back to school the next day.Photo: Screenshot/Fox 4

Students marching with a Gay-Straight Alliance in their school’s Homecoming parade were jeered and bullied by other high school students.

This past Thursday, around a dozen students marched with Olathe Northwest High School’s GSA in the parade. They first marched past the elementary school students and the middle school students, and there weren’t any problems.

But the high school students were different. Some threw candy at the GSA members, and some people shouted hateful slurs. Several students heard them chanting “Make America straight again,” a riff on Donald Trump’s slogan “Make America great again.” Another student said she was told to kill herself.

Witnesses told Fox 4 that the taunting lasted several blocks and that the GSA students were crying at the end.

One mother, identified only as “Missy,” said that her daughter was excited for weeks to march with the GSA. But when she picked up her daughter at the school, the daughter said, “Mom, it was awful. They were saying awful, ugly things and calling us names.”

“I’m embarrassed because this is where I grew up,” Missy said. “This isn’t who we are, come on. Where is this coming from? Why? Why do we have to hate each other? I don’t get it.”

The school sent out an email on Thursday that addressed the “inappropriate student conduct.” It said that the school is investigating what happened. “Olathe Northwest High School does not and will not accept any conduct that is disparaging or harassing to our students, staff or community,” the email read.

On Friday, an announcement was made at the school that said that the behavior was not acceptable and asked students who knew anything to come forward. “Hateful comments directed toward any student or group of students have no place at ONW,” the announcement said. Another email was sent to parents saying that the investigation would continue.

Still, one of the targeted students stayed home. Cassandra Peters, a community member who founded a support group for students called QSpace, said that eight students told her about the attack. “They’re not saying I don’t like your dress. You’re saying I don’t like your existence. That is fear that they’ve instilled in them that lasts way long than when they change their clothes.”

Another student said, “Before I thought my school was a safe place for me to be, and now I’m just kind of scared, and I’m wondering if I should even speak out.” One targeted student stayed home from school on Friday.

Olathe Northwest High School’s administration said that the event was supervised by teachers, but that none of them saw what happened. “We didn’t see it, if we’d seen it, we would’ve stopped it immediately,” Assistant Superintendent Erin Dugan said. “Kids do a nice job of doing things when the adults aren’t watching. They know our expectations.”

“It’s nice that they said, ‘Hey, we’re concerned,'” Missy said. “And, yeah, we got an email. Well, so what. These kids had to get up the next day and go to school. That takes a lot of guts.”